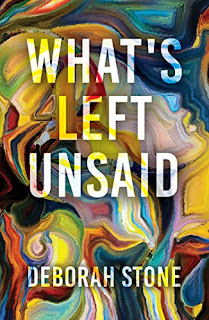 I am delighted to welcome Deborah Stone to Books, Life and Everything today to talk about Joe and Annie, two characters in her debut novel, What's Left Unsaid. Before we hear from her, here's more about her novel in which she explores the devastating impact of trauma, hidden identity and deceit within a family unable to face the truth.


Sasha is just about managing to hold her life together. She is raising her teenage son Zac, coping with an absent husband and caring for her ageing, temperamental and alcoholic mother, as well as holding down her own job. But when Zac begins to suspect that he has a secret sibling, Sasha realises that she must relive the events of a devastating night which she has done her best to forget for the past nineteen years.

“In this novel, I wanted to explore how traumatic events in ordinary people lives, left unresolved, can have a catastrophic effect on families. Personal trauma and tragedy is so often ignored, rather than properly addressed and resolved. This can lead to dishonesty; individuals keep dark secrets and tell lies, even to the people they love the most, which can damage relationships, sometimes irreparably,” explains Deborah of her debut novel. “That’s why I chose to tell this story from three perspectives; that of the father from beyond the grave, the mother from beneath her fog of dementia and the daughter, who struggles to understand her loveless relationship with her mother and cope with a terrible trauma of her own.”

Sasha’s mother, Annie, is old and finds it difficult to distinguish between past and present and between truth and lies. As Annie sinks deeper back into her past, she revisits the key events in her life which have shaped her emotionally. Through it all, she remains convinced that her dead husband Joe is watching and waiting for her. But there’s one thing she never told him, and as painful as it is for her to admit the truth, Annie is determined to go to Joe with a guilt-free conscience. As the plot unfurls, traumas are revealed and lies uncovered, revealing long-buried secrets which are at the root of Annie and Sasha’s fractious relationship.

The novel spans several decades, telling the history of the Stein family from the turn of the twentieth century to the present day. Speaking of her inspiration for her novel, Deborah says; “My own mother was evacuated at the age of five during World War Two and my father was a young man working as an ARP warden. This novel is purely fictitious, but I wanted to explore the traumas that many ordinary people of the war generation suffered - experiences which would be quite unimaginable for many of us today – and then to contrast these with the issues we all face in the modern day.”

Welcome to the blog, Deborah - over to you. 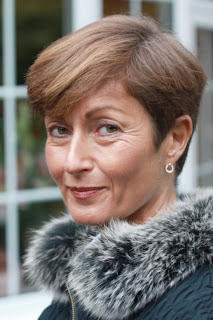 I’ve always wanted to write a novel, but I’ve left it late-ish in life, partly because I was doing other things, like working and bringing up my children and partly because I just couldn’t decide what I wanted to write about. Whilst I still work as a consultant, my boys are men now (well, most of the time!) and I decided that if I was ever going to write my novel, I had better get on with it.

The plus side of writing when you’re that bit older is that you have more life experience to draw on…you’ve met more people, loved, lost, understood real happiness and profound sadness and heard a lot of stories. It took me a long time to get inspired and to develop the themes I wanted to explore, but slowly I realised that I wanted to investigate the impact of trauma on people as children and how it shapes their later behaviour as adults. Annie, the grandmother in my novel, is evacuated at the age of five and stays with a woman who mistreats her. On her return, she suffers a nervous breakdown. This actually happened to my mother. Although my own mother has never spoken to me about her trauma in detail, the image of such a small child away from her parents, frightened and utterly alone has always haunted me, especially once I had had my own children. I piled further trauma on Annie in the novel -which isn’t grounded in truth - but helped me to explore why she might reject her own child later on and what other behavioural problems she might develop in order to manage her demons. In turn, this allowed me to move onto the next generation and explore the impact that Annie’s behaviour has on her daughter, Sasha, who is forced to cope unsupported with many other trials of her own.

I found the character of Joe the easiest and possibly the most enjoyable to write. This comes partly from the fact that Joe is speaking from a perspective, which I have imagined might come after death. He has lived his life, so he can look back over its events with a certain level of objectivity, commenting on the action objectively and with a certain cynical knowledge which the other characters do not possess. Well, he thinks he can, but Joe is not in full possession of the truth, even after death, and it is only at the end of the novel that this is revealed to him. Regardless, Joe is positive, forward-looking and forward-thinking. He is a driven, self-made man, speeding through his life with an unshakeable confidence that he will succeed.

In the first part of the novel, Joe is a commentator, filling the reader in on certain details, reminiscing with Annie and Sasha and talking with the clear benefit of hindsight. Yet we do not know who Joe really is until Part 2, which is devoted solely to Joe’s point of view. I wanted the reader to understand his background and to see how far he had come. It also allows Joe to give a more factual account of his life with Annie, as Annie’s own perspective is clouded by her growing dementia and even though she recollects the past far better than the present, it is never quite clear how much of what she says is true.  For me as a writer, Joe was the steady presence in my mind. I seemed to always know what Joe might say next, while that was never always the case with the other characters.

Thanks so much for those insights, Deborah. It is definitely one for my TBR list.

Deborah Stone read English Literature at Durham University. She lives in North London with her husband, two sons and her dog.