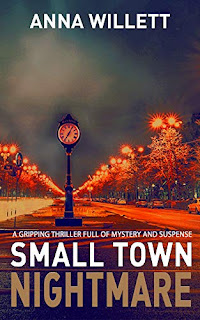 It is a pleasure to welcome author Anna Willett to Books, Life and Everything today on the Blog Tour for her thriller, Small Town Nightmare. I have a great extract for you today to whet your appetite.
A young drifter is in deep trouble, his sister is his only hope...

Lucy’s younger brother has gone missing. When she sets out to find him, the trail takes her to Night Town. It’s a rural backwater deep in the forests of south western Australia.

Lucy tries to enlist the help of the local police, but she is met with hostility. She befriends a man who might help her cause. Yet he is not quite who he says he is.

As the locals begin to resent her presence in the town, danger quickly mounts. The town has secrets and they seem to centre on the enigmatic Samuel Nightmesser, its wealthy benefactor.

What connects her missing brother to this grim boondock? And why do the townsfolk want rid of Lucy?

As the story unfolds we are immersed in a creepy, claustrophobic drama in which everything is at stake. If you like books with a strong female lead that keep you on the edge of your seat, you’ve found your next favourite read.

Despite the dip in temperature, the night skies were clear and freckled with stars. Tim finished peeing and followed the light from his phone back to the tent. Once inside, he rolled out his sleeping bag, smiling at the ponies galloping across the nylon cover. The one-man tent and girl’s sleeping bag were a bargain at eighteen dollars and worth their weight in gold on cold nights. He’d also gone crazy and bought a battered copy of How it Works – Volume 5 for fifty cents. It was the one book in the series he’d never read, so the probability of coming across a copy at a small town garage sale was somewhere in the range of eight thousand to one. Maths aside, Tim took the find as a good omen, not that he believed in such things. Still, spotting the out-of-date manual on a table littered with porcelain dog statues and Tupperware containers set his pulse racing.

He closed the book and shoved it in his pack. If his sister, Lucy, could see him now, camped illegally just outside a small town, she might not be impressed by his choice of lifestyle, something they’d agreed to leave out their infrequent chats. But she’d certainly have something to say about his living arrangements.

Tim pulled a dark woollen beanie out of his pack and stretched it over his head, dragging the edges down so his ears were covered. Fishing his small stash out of a rolled-up pair of socks buried at the bottom of the pack, he threw open the tent flap and shuffled outside.

Being alone and in the outdoors cleared his mind. He was still taking his pills, but the haze of hopelessness that had shadowed him since his mid-teens seemed to be blown away by the crisp air and stillness of the forest. He suffered from depression, but wasn’t an idiot. Tim knew his brain wasn’t really affected by smog and traffic, but the weight of the world filled the city streets in a way that pushed down on him until life seemed endless and without meaning.

He rolled a joint and lit it, sucking in the smoke and holding it in his lungs. “Oh yeah.” He spoke to the moon, full and silvery, then let the smoke roll over his tongue and out into the night air.
Around him, the forest was quiet, only the infrequent hoots from a lone owl broke the silence. He’d have to head back in the morning, find a place to charge his phone, then make the journey home. Lucy would be thirty-three in a few days; her birthday was like a homing beacon, his signal to check in. Tim didn’t mind making the trek; his only regret was leaving behind the wildness of living outdoors.
He was a tramp, a vagrant, any of the tags put on him fitted, but none of them mattered. After his last stint in Graylands Hospital, he had decided to stop trying to force his mind into suburbia and just be. Whether it was the miles of deserted coastline, the rugged bushland or the forest, as long as he could breathe and maybe score some weed, he was as close to happy as his brain would allow.
With the joint clamped between his lips, Tim pulled out his phone. Only a few bars left, but enough to send Lucy a message and use the torch until he found a visitors’ centre in town. He fired off a text and attached a photo, noticing it was now ten p.m. She’d be asleep, getting her rest so she could get into work early in the morning. He couldn’t help chuckling at how different they were. Lucy the journalist, always pushing for the next big story, and him… Tim’s thoughts wavered. He wished he could be there for her more. Since their parents died, his sister had been a mother to him. His protector, always making time to attend his psych meetings, but in many ways Lucy was as lost as him. She needed someone. Someone that was strong enough for her to lean on.
He took one last drag then pinched off the lighted end of the joint. He’d stay longer this time, make an effort to make Lucy’s birthday special. The twentieth of June was the anniversary of their parents’ death, but maybe after all these years they could celebrate it as her day, without the pull of sorrow.

After stowing the small butt with his stash, Tim crawled back inside the tent and folded himself into the sleeping bag. Outside the tent came a crackling of twigs and the brush of leaves. Tim attributed the sounds to the usual nocturnal creatures moving around in the bush. He closed his eyes and fell into an easy sleep. Some time later, heavy boots landed at the entrance to the tent. 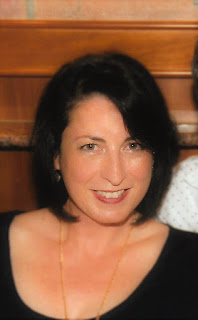 Published on 29th August 2018 and available in paperback and eBook formats.

Thanks to Anna and Emma Welton of Damppebbles Blog Tours for a place on the event.

Do be sure to follow the rest of the tour! 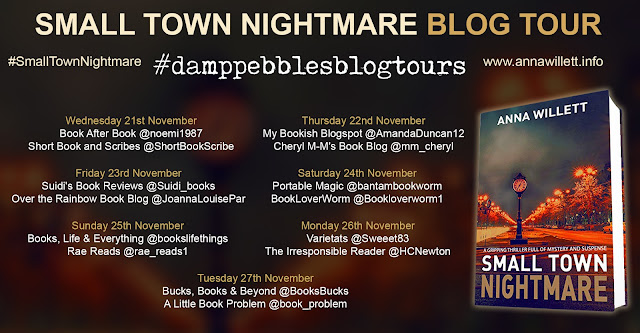