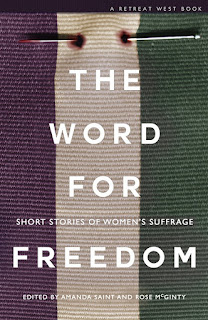 Today we have a Short Story Anthology, The Word for Freedom which was published by Retreat West on November 1st 2018. This collection not only celebrates Women's Suffrage but also raises money for Hestia.

Take a look at a collection of 24 short stories celebrating a hundred years of women’ suffrage, from both established and emerging authors, all of whom have been inspired by the suffragettes and whose stories, whether set in 1918, the current day or the future, focus on the same freedoms that those women fought for so courageously.

A clerk of works at the Palace of Westminster encounters Emily Davison in a broom cupboard; a mermaid dares to tread on land to please the man she loves; a school girl friendship makes the suffragette protests relevant to the modern day; a mother leaves her child for a tree; an online troll has to face his target; and a woman caught in modern day slavery discovers a chance for freedom in a newspaper cutting.

These stories and many more come together in a collection that doesn’t shy away from the reality of a woman’s world, which has injustices and inequalities alongside opportunities and hard-won freedoms, but always finds strength, bravery and hope.

Through this anthology Retreat West Books is proud to support Hestia and the UK Says No More campaign against domestic abuse and sexual violence.

Authors that have donated stories include:

This Short Stories Collection offers a variety of stories which are all concerned with the effect on the individual of inequality in all its different forms. They are all so different and yet the themes of hope, self-awareness and bravery come to the fore. It is difficult to pick out individual stories as in a way, it is their combined effect  which emphasises their message. However, I particularly enjoyed Christine Powell's Counting for England which uses, as inspiration, the Census night of 1911 when Emily Davison hid in the Houses of Parliament so as to be counted. Emily's determined spirit is on show, as well as the incomprehension of others as to what this small gesture represented.

I also appreciated the ironic humour of Emily Kerr's Out of Office as she finds out the hard way that no matter how equal she may have felt herself, below the surface, other factors have been in play. Some stories are set in the past, others in a future which it is hard to recognise. I found Taria Karrilion's The Servitude of the Sudaarp to be very rewarding. It uses the format of an Examination Test Paper on Alien Cultures and mercilessly exposes the institutional sexism which the society has allowed to happen.

This is a collection of stories to dip in and out of and will reward the reader with some thought provoking points to ponder. In the centenary of the year in which some women were granted the right to vote, it is a challenging but hopeful read.

In short: A varied collection of short stories which illuminates and focuses on the freedoms which the suffragettes strove to gain for all.

Founder, Amanda Saint, is a novelist and short story writer. She’s also a features journalist writing about environmental sustainability and climate change. So all Retreat West Books publications take advantage of digital technology advances and are print-on-demand, in order to make best use of the world’s finite resources.

Thanks to Retreat West Books and Anne Cater of Random Things Tours for a copy of the book and a place on the tour.