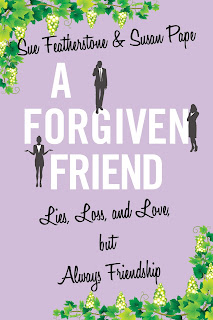 I am  so pleased to feature an extract from A Forgiven Friend, the final book in the Friends Trilogy by Sue Featherstone and Susan Pape.  Before we get to the extract, here;s a little about the book:
Friendship will always come first.


There’s only one way out from rock bottom and that’s up, and Teri Meyer is finally crawling out from the worst time of her life – no thanks to her best friend Lee. But no matter, she’s finally found love – real love with a real man, a successful man, a man who accepts all her flaws. Teri’s never felt like this before, and yet it’s changing her in ways she doesn’t understand.


It seems that no matter how hard Lee Harper tries, there’s a battle awaiting her at every turn these days, and she’s tired. And as if she needs the extra stress, Teri continues to create constant and unnecessary drama. But Lee’s the only one who really knows what’s going on under Teri’s hard, convoluted exterior, and that’s why she’s always been there for her.


But the question is: will Teri be there when Lee needs her most?


Stylish, but stubborn and selfish, Teri Meyer has fallen out with yet another man – the television boss, Richard Walker (aka Duck’s Arse, so named because of his peculiar up-flicked hairstyle). So she has no-one to accompany her to the funeral of her best friend, Lee Harper’s father. Only, when she arrives at the church who should be there but one of her former lovers, local newspaperman Declan? And he wants her back.

I was wondering about the possibility of waiting in the church porch rather than joining the people trooping through the graveyard jungle. Some of the women were doing that odd, lurching dance you do when your heels get stuck in soft ground and you have to force yourself forward, while at the same time hoicking your foot to free the wretched shoes from the clag. But Declan – ever the gentleman (not) – took my arm and propelled me forward. ‘Let me help you across the divide, madam,’ he said with mock gallantry.

So I leaned on him, rather heavily, and we set off.

It dawned on me that I’d never been to an actual burial before. I don’t recall attending any family funerals, either, although I must have done, surely? My parents had parents of their own, and they must have died when I was a little girl, and I’d have gone to their funerals? Wouldn’t I? Nope, don’t remember. Knowing my parents, though, Dad would have been too busy to take time off from his beloved factory, and Mother would have been incapable having diluted any grief with gin. I swear that woman cried tears of pure alcohol.

So it was not something I was looking forward to: seeing a coffin, carrying my best friend’s father, lowered into the wet, sludgy ground where he’d be forever. I shuddered and Declan hugged me closer.

In all honesty, I wished it was Duck’s Arse by my side; Duck’s Arse giggling as he tugged me across the grass; Duck’s Arse saying something along the lines of how we’d get this over with and then go home together. But at that moment, I was just relieved to have someone with me. Even if that someone was Declan.

Quite a crowd had gathered at the graveside. Declan and I stood on the outskirts, peering forwards, he with an arm around me, protectively.

‘Don’t you get any ideas, Declan,’ I warned him.

‘As if I would,’ he replied, trying to sound hurt that I could suggest he was up to something.

We watched the coffin being lowered. We watched Lee sprinkle a handful of earth. We watched as the family, heads bowed, walked silently away.

As the crowd thinned, I stepped up to the open grave, bent down, picked up some wet soil, and dropped it on the coffin lid. ‘Bye bye, Mr Harper. I know I don’t always do a good job of it, but I try to look out for your daughter.’

‘What was that?’ Declan asked, coming to my side. 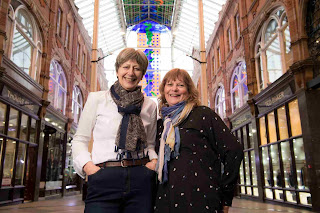 Sue Featherstone and Susan Pape are both former newspaper journalists with extensive experience of working for national and regional papers and magazines, and in public relations.

More recently they have worked in higher education, teaching journalism – Sue at Sheffield Hallam and Susan at Leeds Trinity University.

The first novel in their Friends series, A Falling Friend, was released in 2016. A Forsaken Friend followed two years later, and the final book in the trilogy, A Forgiven Friend,is published on November 19.

Sue, who is married with two grown-up daughters, and the most ‘gorgeous granddaughter in the whole world’, loves reading, writing and Nordic walking in the beautiful countryside near her Yorkshire home.

Susan is married and lives in a village near Leeds, and, when not writing, loves walking and cycling in the Yorkshire Dales. She is also a member of a local ukulele orchestra. 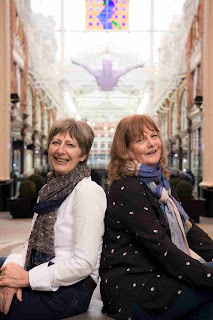 Thanks to Sue Featherstone and Susan Pape, and Rachel of Rachel's Random Resources for the extract and a place on the tour.