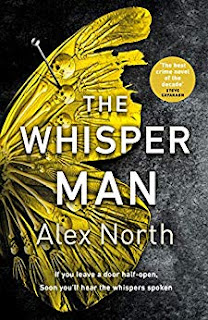 Today I have a truly unsettling and disconcerting psychological thriller for you- The Whisper Man by Alex North. Published on June 13th by Michael Joseph, it has already been getting some rave reviews and is a major Hollywood film in the making.

“A dark, creepy, thriller with a huge amount of heart. Damn, but Alex North can write!” Stuart MacBride

“A novel about the dark places that are recognisably our own, The Whisper Man plays on our emotions as much as on our fears. A tremendous calling card for the brilliant Alex North” Mick Herron

“Fantastic. He writes beautifully, with a powerful understanding of the effects of loss and damage on the human psyche and a style that sweeps you into its grip and never lets go. I’m totally sold on Alex North” Alex Marwood


If you leave the door half open, you will hear the whispers spoken...

Still devastated after the loss of his wife, Tom Kennedy and his young son Jake move to the sleepy village of Featherbank, looking for a fresh start.

But Featherbank has a dark past. Fifteen years ago a twisted serial killer abducted and murdered five young boys. Until he was fi nally caught, the killer was known as ‘The Whisper Man’.

Of course, an old crime need not trouble Tom and Jake as they try to settle in to their new home. Except that now another young boy has gone missing, stirring up rumours that the original killer was always known to have an accomplice. And then Jake begins acting strangely.

He says he hears a whispering at his window...

This turned out to be a mesmerising read which unsettled and surprised in turn. Although it has all the hallmarks of a gripping psychological thriller, from scary settings and shadowy figures to shocking scenes and characters who you can hardly bear to read about, it also has a subtlety which looks at father / son relationships and deals with grief and loss with compassion and realism.

The pacing of the story is first class. You move from character to character, seeing the action mainly through Tom's eyes but also get to find out what other characters are thinking too. There are no spoilers here, I hope, so suffice to say, the past reappears in a shocking way and there are certain scenes which will leave you breathless.

As you read the story, you find yourself dreading what might be coming next. It does not disappoint and leaves quite a mark on you. Chilling, dark, intense- the writing is all these things and more.

In short: Read this one with the lights on and the doors locked!

Alex North was born in Leeds, where he now lives with his wife and son. He studied Philosophy at Leeds University, and prior to becoming a writer he worked there in their sociology department.


Thanks to Jenny Platt of Michael Joseph for a copy of the book and a place on the tour. 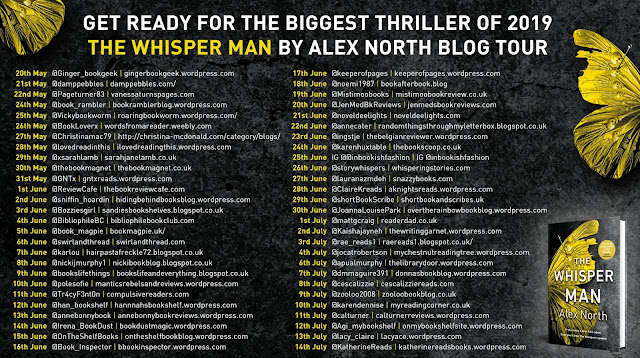