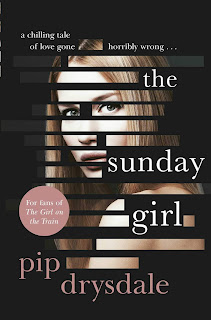 Today I have a great extract from Pip Drysdale's debut novel, The Sunday Girl. See if you like it...
The Girl on the Train meets Before I Go to Sleep in this chilling tale of love gone horribly wrong …

“Some love affairs change you forever. Someone comes into your orbit and swivels you on your axis, like the wind working on a rooftop weather vane. And when they leave, as the wind always does, you are different; you have a new direction. And it’s not always north.”

Any woman who’s ever been involved with a bad, bad man and been dumped will understand what it feels like to be broken, broken-hearted and bent on revenge.

Taylor Bishop is hurt, angry and wants to destroy Angus Hollingsworth in the way he destroyed her: ‘Insidiously. Irreparably. Like a puzzle he’d slowly dissembled … stolen a couple of pieces from, and then discarded, knowing that nobody would ever be able to put it back together ever again.’

So Taylor consults The Art of War and makes a plan. Then she takes the next irrevocable step – one that will change her life forever.

Things start to spiral out of her control – and The Sunday Girl becomes impossible to put down.
Extract

Some love affairs change you forever. Someone comes into your orbit and swivels you on your axis, like the wind working on a rooftop weather vane. And when they leave, as the wind always does, you are different; you have a new direction. And it’s not
always north.

But you learn that this was their job, their role in your life. You should let them go; you cannot blame the wind for leaving, for that is what wind does. I know all that in theory. I’m not an idiot. I’m well versed in contemporary wisdom and the inspiring nature of Instagram memes. But here’s the thing: in real life, in the sphere of true human existence, theory holds an old quill pen, while a broken heart wields a gun. No competition, really.

So, that covers the why: love – broken love – made me do it.

Love. And a sex tape.

The how, on the other hand, is a bit more complicated.

Well, that’s the simplest of all: it started four days, eighteen hours and twenty-three minutes after the strongest gust of wind I’d ever known decided to leave me.

It was February in London, so cold. The rain was tapping lightly on the window, folded newspaper stuffed into the edges to fixthe leak, and I was sitting on a beige-and-red hand-me-down rug on the floor in the middle of my apartment. I’d drunk most of a bottle of chardonnay and was conducting what I thought at the time to be a reasonably justified Sunday night Google search: how to ruin a man. Or, if I’m being truly faithful to history: gow yo ruin a nan. Luckily Google can quickly decode drunk-girl speak.

Type that in and the following two main sets of results appear.

One: pages full of concise, step-by-step instructions in tepid psychological warfare against your ex (most of which involve posting provocative photographs of yourself with other men all over social media; except for one page, which, if you find it, provides detailed instructions on how to acquire an undeserved restraining order).

Two: pages full of concise, step-by-step instructions on how to win said ex back (mostly suggesting the ‘no-contact rule’ in conjunction with intermittent and low levels of those tactics outlined in option one).
Both of these were useless to me. I refused to believe I wanted him back, and I needed something a bit stronger than the no-contact rule to inflict the kind of damage I was yearning for; I wanted ashes. Flaming ashes. The kind that only a woman truly betrayed by the man she loves can crave. I was done with making excuses for him, done with being a casualty, done with playing nice.

The question I keep asking myself is: would I have stopped right then and there if I’d known how things would turn out? But I don’t suppose it matters – I didn’t know. Besides, I wasn’t really open to rational argument: I was fuelled by the white-hot fury known only to the young, the oppressed and the broken-hearted. And so all Fate had to do was set up her cosmic dominos around me and then wait until I let the first piece fall. Which I did, right on cue: the moment I pressed ‘enter’ and let my will to destroy him escape into the ether, that first domino toppled irrevocably and one thing led to another.

Because that’s the thing with dominos: easy to start, hard to stop. And impossible to know where they’ll lead.

Of course, the easy answer to ‘Would I have stopped?’ is: Yes. Damned straight I would have stopped. If face-to-face with a jury I would surely say just that. But if I am truthful, really truthful, the hand-on-my heart answer is: no, probably not.

It was too late for that.

Because I’d always been the good girl. The amicable, pliable, understanding girl. The kind of girl you could take home to meet your parents, introduce to all your friends and keep around long after the love faded to beige, simply because she was (I was) so very amenable. And that’s precisely why Angus loved me, needed me, why we were ‘meant to be together’: I was the ‘perfect yin’ to his yang, he was ‘a better version’ of himself when I was in the room.
Kinder. Or at least, that’s what he’d always said.
But everybody has their limit, a boundary you just can’t cross, and Angus eventually found mine.

And so, two days before the above-mentioned Google search, that amicable, pliable, understanding girl finally snapped. A rubber band, stretched a millimetre too far. And in that moment, Life lifted the veil of saccharine I’d been hiding beneath and forced me to come face-to-face with the other parts of my psyche. The darker parts. The ugly parts. The fragile, petty, venomous parts.

The parts I may never have found if it wasn’t for him.

And those parts didn’t cower. They fought back.

It’s not that I wanted to be a bad person – nobody wants to do bad things. And if it had just been our dark and distorted history, the secrets that bound us and a shitty break-up, I may have held it together. I like to think I would have just moved on. But it wasn’t. There was something else. Something more.

And I learned about it via a Facebook message.

I sent it to my phone, clicked on it and a video filled the screen.

A video of me.

A video of me that nobody else was ever meant to see: my ruffled dark blonde hair falling over one eye as I smiled coyly at the camera. My co-star’s name was Holly. We’d met her in a club at 3am. It was Angus’s idea. I’d never even kissed a woman before her, but it was nice. Soft. She tasted of berries and salt. And the footage, dimly lit and shaky, was never supposed to leave Angus’s possession.

Yet there it was, staring back at me, my full name included in the video’s description – this must have been how the two men found me. Google is good like that.

My cheeks turned hot. My heart thrashed against my chest walls. And as my mind registered the horror of what I was seeing and I pressed the cross in the corner of the screen, removing it from my phone before any incriminating sound played, something broke inside me. Something vital. It was almost audible: snap.

Maybe it was trust. Perhaps it was virtue. Or maybe it was my sanity.

But after twenty-nine years of embracing the virtues of kindness, tolerance and forgiveness – of living by two wrongs don’t make a right – I’d finally had enough. All yin has a little dot of yang in it, after all. And so, as my boss tapped away on her keyboard just a metre away from me and I stared blankly at my computer screen, pretending everything was fine, Life whispered a new mantra in my ear: survival of the fucking fittest.
Hence, the Google search. And everything that followed. 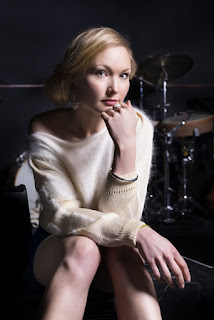 Pip Drysdale is a writer, actor and musician who grew up in Africa and Australia. At 20 she moved to New York to study acting, worked in indie films and off-off Broadway theatre, started writing songs and made four records. After graduating with a BA in English, Pip moved to London where she dated some interesting men and played shows across Europe. The Sunday Girl is her first novel and she is working on a second. She currently lives in Australia.

Thanks to Pip Drysdale and Anne Cater of Random Things Tours  for a place on the tour. 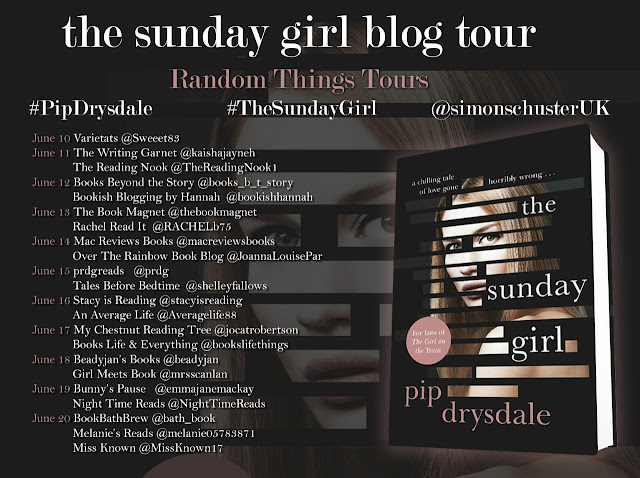