The House of Secrets by Terry Lynn Thomas #AuthorPost 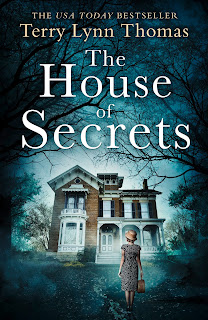 I am delighted to welcome Terry Lynn Thomas to the blog today to talk to us about the writing of her characters. Terry's book, The House of Secrets is the second in her Sarah Bennett Mysteries series and was released on 19th April 2019.

Sarah Bennett has two secrets: she sees ghosts, and she is in love with a spy.
When Sarah takes a job with occult expert Dr Matthew Geisler, he promises to help her understand the sorrowful spirit that seems to have attached itself to her.

As Sarah struggles to cope with the ghostly presence, she runs into Zeke, the man who left her six months earlier and is recovering from injuries suffered in an alleged accident. But Zeke has secrets of his own, and when an attempt is made on Geisler’s life, Sarah finds herself caught in a struggle between the living and the dead.
Unsure who she can trust, Sarah must solve the mystery of the soul determined to haunt her, and save Dr Geisler and herself from an unknown threat.

This book was previously published as WEEPING IN THE WINGS

Welcome to Books, Life and Everything Terry. Now, it's over to you!

The House of Secrets -- Let’s Talk about Characters

Setting The House of Secrets in an asylum really helped me to develop a cast of interesting characters, all grappling with issues of their own. I’ll share the backstory of a few of favourites.

Dr Matthew Geisler, a continental aristocrat with a storied family history, has enjoyed an illustrious career as a psychiatrist. He had successfully treated many of his patients and his opinion was sought by the leaders in his field. Dr Geisler parlayed his well-deserved reputation and used his inherited wealth to open a psychiatric hospital. (Note – I used the famous Whittier Mansion in San Francisco, which once served as the German Consulate prior to World War II as the setting for The Geisler Institute. You can read about the Whittier Mansion here. However, of late Matthew had expressed an undue interest and concern in the occult – much to the chagrin of his colleagues and his wife. Matthew had been turning away legitimate patients (soldiers suffering from what was then known as shell shock were just starting to return home from stints in battle) to pursue proof of ghosts. This, coupled the belief that his dead sister was trying to communicate with him, put Dr Geisler’s career in jeopardy. When Dr Geisler discovers that Sarah Bennett may be a true medium, he is anxious to find a job for her at his hospital. He believes that the visions which have forced her family to commit her to an asylum, may actually be paranormal in nature.

When I think of Minna Summerly, I see an aged but still beautiful Stevie Nicks in my mind’s eye. Decades earlier, Minna left her fiancé, Gregory Geisler, (Dr Geisler’s brother) standing at the altar. As a result of being jilted, Gregory allegedly jumped off the Golden Gate Bridge. Now Minna is convinced that Gregory is alive and trying to seek revenge, haunting her, or that she is losing her mind. Minna believes she is a medium, and is jealous of Dr Geisler’s interest in Sarah.

Here’s one of my favourite scenes with Minna:

Minna. She stood near the front door, a black dressing gown flowing over her bony frame like a witch’s cloak. Her hair hung in wild curls the color of spun silver. She looked as though she could have raised her arms and cast a spell or hopped on a broom and flown away. Instead she held a piece of paper in her trembling hand. Scattered around her feet were the petals and stems of a desiccated bouquet of roses. A flower box from Podesta Baldocchi lay on its side, tossed away in the chaos.

Chloe sat at her desk, observing everything, missing nothing, her eyes huge. The maid, a young girl in a uniform two sizes too big, froze, holding the dust rag suspended in midair.

I moved toward Minna, desperate to help her, but Bethany waved me off.

“Sarah. Bethany.” She waved the paper she held in her hand through the air. “It’s Gregory. He’s alive.” Her breathing became heavy and deep. She tore the letter up, threw the pieces on the floor, covered her face with her hands, and wept. Deep racking sobs coursed through her body, threatening to topple her.
Bethany swept in and put a comforting arm around Minna’s shoulder. She spoke to her in the same sweet, disarming voice she had used on Mr. Collins. “Come on, dear. Let’s get you someplace safe. We’ll lock the house and make sure that Gregory isn’t here. I’ll see to it personally.” She spoke to the maid. “It’s all right, young lady. Go see Mrs. McDougal for a cup of hot cocoa. There’s a good girl.”

“You’ll protect me, won’t you, Bethany? And Matthew. He’ll come for Matthew.”

“Of course,” Bethany said in a soothing voice. “I’ll take care of everything.”

Minna allowed herself to be led away. The two women made their way toward the staircase, while Bethany muttered comforting words in Minna’s ear.

Just as they were about to reach the first landing and slip out of sight, Bethany called to me. “Find my husband. Tell him to hurry.”
Before heading off to search for Dr. Geisler, I picked up the torn pieces of paper that Minna had thrown on the floor and tucked them into my pocket. I had every intention of finding out the truth about Gregory Geisler.

Thanks for hosting me. I hope your readers enjoy The House of Secrets.

Terry Lynn Thomas grew up in the San Francisco Bay Area, which explains her love of foggy beaches and Gothic mysteries. When her husband promised to buy Terry a horse and the time to write if she moved to Mississippi with him, she jumped at the chance. Although she had written several novels and screenplays prior to 2006, after she relocated to the South she set out to write in earnest and has never looked back.

Terry Lynn writes the Sarah Bennett Mysteries, set on the California coast during the 1940s, which feature a misunderstood medium in love with a spy. The Drowned Woman is a recipient of the IndieBRAG Medallion. She also writes the Cat Carlisle Mysteries, set in Britain during World War II. The first book in this series, The Silent Woman, came out in April 2018 and has since become a USA TODAY bestseller. When she’s not writing, you can find Terry Lynn riding her horse, walking in the woods with her dogs, or visiting old cemeteries in search of story ideas.


The House of Secrets is 99p throughout June as part of the June Kindle Monthly deal.   The Spirit of Grace, book 1 in the series is also .99 throughout June.

Thanks to Terry Lynn Thomas and Rachel of Rachel's Random Resources for the author post and a place on the tour. 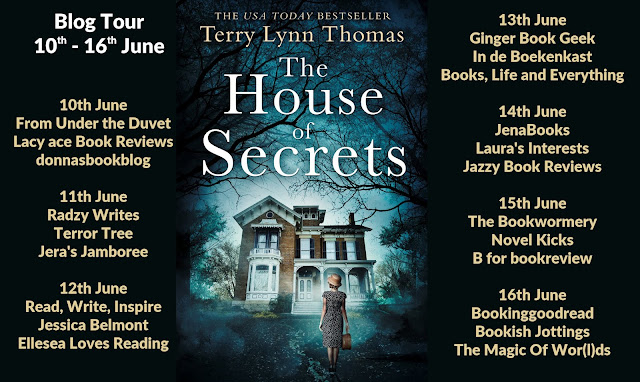