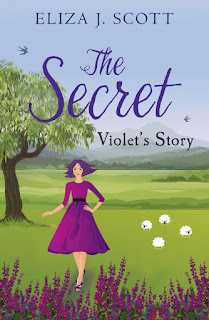 I am happy to be featuring Eliza J. Scott's novel, The Secret- Violet's Story today. I also have a great extract for you so you can sample a little of the book.

It’s been two years since glamorous and ambitious Violet Smith fell head-over-heels in love with blacksmith Jimby Fairfax, and moved back home to the North Yorkshire village of Lytell Stangdale to be with him.


Life couldn’t get much sweeter. Their romance is blooming and Romantique - the business she set up with Jimby’s sister Kitty, designing luxurious underwear and burlesque costumes with the odd wedding dress throw in - is thriving.


But on a romantic weekend break, a face from her past triggers a series of events which send Violet into turmoil. She finds herself with no alternative but to reveal a secret she’s buried deep for the past sixteen years. A secret she hasn’t shared with anyone, not even her best friends, Kitty and Molly, and they share everything.


With the revelation forcing a wedge between herself and Jimby, heartbroken Violet fears that he won’t ever be able to think of her in the same way again and won’t want anything more to do with her.


As ever, Kitty and Molly rally round, offering their advice and support but Vi is worried that keeping her secret was just a step too far for Jimby.


Will she succeed in showing him their love is strong enough to overcome it?

Extract
Here's an extract from the story from Chapter 4 which finds Violet and Jimby just heading down for dinner at the hotel where Jimby has booked a surprise night away.

After a enjoying a languorous bubble-bath together, Vi and Jimby were heading down to the restaurant. Vi, glamorous as ever in another fifties-style dress, this one was in figure-hugging amethyst satin that skimmed over her voluptuous curves. Her glossy hair was swept back at the sides and fixed with a pair of vintage marcasite grips in the shape of butterflies. On her feet were a pair of eye-wateringly high heels that still kept her a good five inches below Jimby’s towering height of six foot two.

‘Looking rather gorgeous, Miss Smith.’ His eyes roved over her, his pupils darkening. ‘I could very easily be tempted to take you back to the room and have you for dinner.’

Her heart soared; she loved that he appreciated her curves, that she could be herself and not have to deprive herself of sweet treats or watch her figure. ‘You don’t scrub up so badly yourself.’ She stood before Jimby who was looking handsome, his usually unruly curls momentarily tamed, his jeans swapped for a pair of smart dark blue chinos and a newly purchased finely woven tweed jacket. ‘But my stomach’s rumbling after that walk, and it would be rude to cancel our reservation this late in the day.’

‘Spoilsport.’ He grinned. ‘I’ll catch up with you later.’

‘Promises, promises.’ With a lopsided smile, she took his hand and led the way along the corridor, passing the lift. ‘I think we’ll take the stairs,’ she said, making him laugh.

The restaurant was as tastefully decorated as the rest of the hotel, with hand-printed wallpaper in shades of pale yellow and off-white lining the walls above mellow oak panelling. The level of lighting from burnished brass wall lights was set to create an ambient atmosphere, and gentle music blended with the discrete hum of conversation. To add to the mix, mouth-watering aromas of food permeated the air.

They were seated at a table overlooking the garden – Jimby had asked for a window view when he’d made the original reservation. ‘Mmm. Everything sounds so delicious,’ said Vi. They were perusing the extensive menu that had a heavy emphasis on seafood. ‘I think I’m going to have to go for the hot smoked salmon starter – it sounds so yummy – followed by the monkfish wrapped in Parma ham.’

‘Hmm, it does sound good, I’m finding it hard to choose, but I think I’m going to have the crayfish cocktail starter, then it’s got to be lobster thermidor for me.’

The starters were every bit as good as expected and the couple were soon tucking into their main courses. ‘Mmm, this is scrummy.

You’ve got to have a taste, Jimby.’ Vi pushed a chunk of monkfish onto her fork, followed by a small amount of crushed potato dipped in the roasted red-pepper sauce, and offered it to him.

‘Mmm.’ He nodded, his eyes betraying his feelings. He finished his mouthful and spoke, ‘Oh, man, that’s seriously good. That sauce …’
‘I know.’ Vi giggled.

‘Here, try some of this lobster.’ He reciprocated Vi’s gesture, which was received in much the same way as the monkfish.

‘Well, I’d heard good things about this place, but it’s outdone every single one of my expectations.’ Jimby took a sip of his crisp white wine.

‘Me, too. Thank you for bringing me here, Jimby. I feel very spoilt.’

‘You’re welcome. It’s nice to have some time just the two of us.’

I loved picking up the story in Lytell Stangdale and meeting up with some of the characters again. Violet is a particularly strongly drawn character and I found her to be a vivid character. I could visualise her easily in her shades of purple as she took on the fashion of Elizabeth Taylor and I particularly enjoyed the scene where she had to go against type and wander onto the moors in search of Jimby. You get to understand what makes her tick and how she grew up.

In short: The past comes back to haunt - but does it matter?


Eliza lives in a 17th-century cottage on the edge of a village in the North Yorkshire Moors with her husband, their two daughters and two mischievous black Labradors. When she’s not writing, she can usually be found with her nose in a book/glued to her Kindle or working in her garden. Eliza also enjoys bracing walks in the countryside, rounded off by a visit to a teashop where she can indulge in another two of her favourite things: tea and cake.

Eliza is inspired by her beautiful surroundings and loves to write heart-warming stories with happy endings.

Book links: Amazon UK
Thanks to Eliza J Scott, and Rachel of Rachel's Random Resources for a copy of the book and a place on the tour. 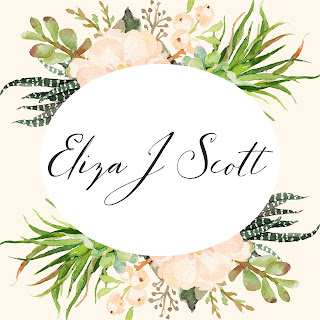 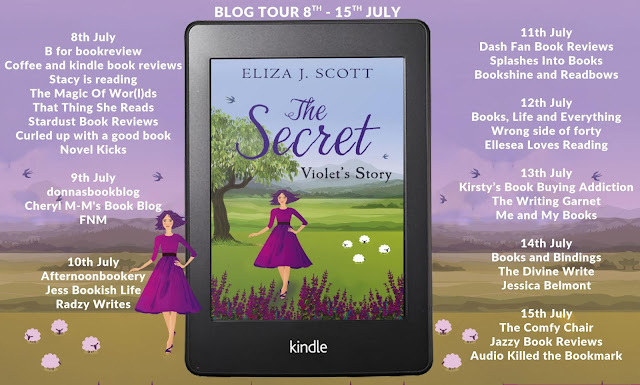