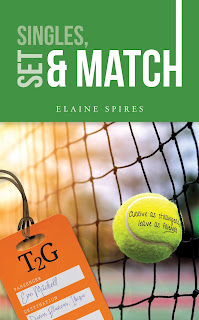 Today, I am delighted to feature Singles, Set and Match which is the fifth and final book in Elaine Spires' Singles Series, I read it as a standalone which was fine.

Singles, Set and Match takes us to the  Mediterranean island of Ibiza then back to the Caribbean island of Antigua, where it all began.

After making a hard decision two years earlier Eve Mitchell has moved on with the hand that life has dealt her and she finds herself on the White Island working a tennis holiday.  While it isn’t a job she would have chosen, in her typical pragmatic way Eve gets on with it, working hard to ensure that her diverse group of singles, with their hopes, expectations character flaws and baggage, have the best time possible.  And as she binds together tennis sessions, social gatherings, meals and trips Eve hears some tragic personal news that brings her to another crossroads in her life.

Will she and the love of her life Melv finally make a life together and live happily ever after?

You are taken over to Ibiza for this summer read. I hadn't read any of the series and though as a standalone, the book is enjoyable, I am sure that I would have picked up on the subtleties behind how Eve was feeling if I had read some of the others. The ending was certainly a shock and most definitely not what I was expecting.
It took me some time to get used to following so many people but once I was accustomed, it was fine. Eve is a fascinating character and there are lots of big personalities amongst her party of tourists. The writing is a mixture of sad and hilarious moments which actually probably mirrors real life, doesn't it? I enjoyed reading about Ibiza as the party travelled about and it definitely feels like a holiday read.

In short: Travel to Ibiza for some summer fun! 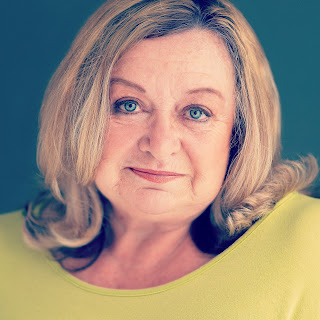 Elaine Spires is a novelist, playwright, screenwriter and actress. Extensive travelling and a background in education and tourism perfected Elaine's keen eye for the quirky characteristics of people, captivating the humorous observations she now affectionately shares with the readers of her novels. Elaine has written two books of short stories, two novellas and seven novels, four of which form the Singles Series - Singles’ Holiday, Singles and Spice, Single All The Way and Singles At Sea.  Her latest book, Singles, Set and Match is the fifth and final book in the series.  Her play Stanley Grimshaw Has Left The Building is being staged at the Bridewell Theatre, London in May 2019.  Her short film Only the Lonely, co-written with Veronique Christie and featuring Anna Calder Marshall is currently being in shown in film festivals worldwide and she is currently working on a full length feature film script. Only the Lonely won the Groucho Club Short Film Festival 2019!  Elaine recently returned to UK after living in Antigua W.I. She lives in East London.


Thanks to Elaine Spires and Rachel of Rachel's Random Resources  for a copy of the book and a place on the tour. 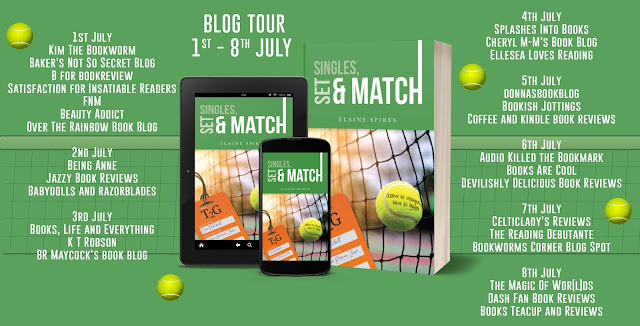