In the Absence of Miracles by Michael J Malone #Review #Giveaway 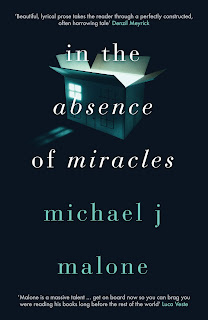 I am thrilled to be taking part in the celebrations for Michael J Malone's latest thriller, In the Absence of Miracles. I also have a great Giveaway with the chance to win a copy of the book. (UK only). For details on how to enter, follow the instructions at the end of the post. This is a compelling piece of domestic noir.
John Docherty’s mother has just been taken into a nursing home. Following a massive stroke, she’s unlikely to be able to live independently again. With no other option than to sell the family home, John sets about packing up everything in the house. In sifting through the detritus of his family’s past he’s forced to revisit, and revise his childhood.


In a box, in the attic, he finds undeniable truth that he had a brother who disappeared when he himself was only a toddler. A brother no one ever mentioned. A brother he knew absolutely nothing about. A discovery that sets John on a journey from which he may never recover. For sometimes in that space where memory should reside there is nothing but silence, smoke and ash.

My Thoughts
This deals with the raw and emotive subject of childhood abuse and I found it to be a tightly written and dark read. As John realises that he had an older brother and delves into what may have happened to him, layers and layers of secrecy and repressed memories are pealed back. This is a subtle exploration of the lasting effects of past events on a family. I cannot say more without spoiling the story but suffice to say, this is a story which shocks the reader even when they think they know where it is heading!

Told mainly through John's eyes, there are passages of flashbacks which show you what happened at different points in the past. It is a controlled narrative with few characters and a claustrophobic feel to the relationships which you see. John is a character who has to face some shocking truths and as he does so, you find his honesty to be scorching. His emotional honesty, when it emerges makes for a captivating read.

In short: Domestic noir at its darkest. 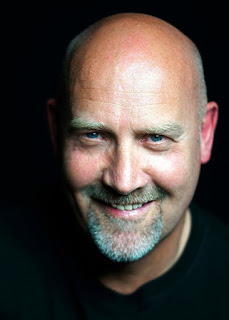 Michael Malone is a prize-winning poet and author who was born and brought up in the heart of Burns’ country. He has published over 200 poems in literary magazines throughout the UK, including New Writing Scotland, Poetry Scotland and Markings. Blood Tears, his bestselling debut novel won the Pitlochry Prize from the Scottish Association of Writers. Other published work includes Carnegie’s Call; A Taste for Malice; The Guillotine Choice; Beyond the Rage; The Bad Samaritan and Dog Fight. His psychological thriller, A Suitable Lie, was a number-one bestseller, and the critically acclaimed House of Spines and After He Died soon followed suit. A former Regional Sales Manager (Faber & Faber) he has also worked as an IFA and a bookseller. Michael lives in Ayr.

You can read my review of House of Spines here and After He Died here.

Thanks to Michael Malone, and Karen Sullivan and Anne Cater of Orenda Books for a copy of the book and a place on the tour. 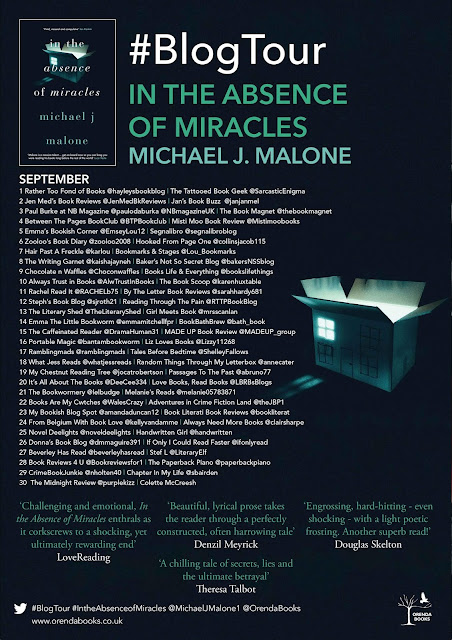 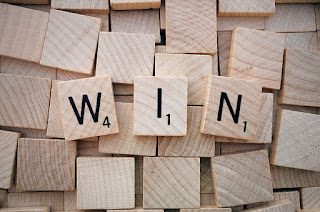 To win a copy of In the Absence of Miracles just Follow and Retweet the pinned tweet at @bookslifethings . Closing Date is 16th September 2019 and there is one winner.  Good luck!