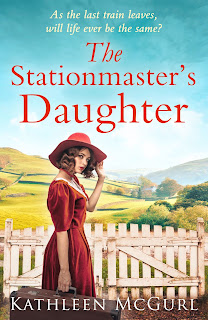 Today is my stop on the tour to celebrate Kathleen McGurl's The Station Master's Daughter. I am delighted to be taking part.

As the last train leaves, will life ever be the same?

Stationmaster Ted has never cared much for romance. Occupied with ensuring England’s most beautiful railway runs on time, love has always felt like a comparatively trivial matter. Yet when he meets Annie Galbraith on the 8.42 train to Lynford, he can’t help but instantly fall for her.


But soon the railway is forced to close and a terrible accident occurs within the station grounds, Ted finds his job and any hope of a relationship with Annie hanging in the balance…

Recovering from heartbreak after a disastrous marriage, Tilly decides to escape from the bustling capital and move to Dorset to stay with her dad, Ken. When Ken convinces Tilly to help with the restoration of the old railway, she discovers a diary hidden in the old ticket office. Tilly is soon swept up in Ted’s story, and the fateful accident that changed his life forever.


But an encounter with an enigmatic stranger takes Tilly by surprise, and she can’t help but feel a connection with Ted’s story in the past.

My Thoughts
In this twin timeline story, the author handles the two threads with aplomb. I particularly enjoyed the earlier story which was set in the 1930's in what can seem like an innocent time before the Second World War arrived and changed people's lives beyond recognition. You have to feel for Ted and Annie, especially when the full truth of what has happend emerges. Secrets from the past and a terrible tragedy hangs over the story with the hint of resolution coming near the end.
The present day story which centres on Tilly's situation has a contemporary feel as Tilly tries to face up to her new reality. She has some profound sadnesses to face up to but there is a touching theme of the power of family ties to underpin her situation. Central to both stories is the glorious Devon countryside and the old Station itself which is part of everytday life in the 1930's but relegated to a project for enthusiasts in the present day. With some relatable characters who have flaws as well as strengths, this is an enjoyable read with a twist in the tail.
In short: Two stories which are linked through hidden secrets.
About the Author 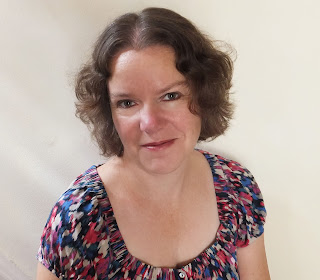 KATHLEEN MCGURL lives near the sea in Bournemouth, UK, with her husband and elderly tabby cat. She has two sons who are now grown-up and have left home. She began her writing career creating short stories, and sold dozens to women’s magazines in the UK and Australia. Then she got side-tracked onto family history research – which led eventually to writing novels with genealogy themes. She has always been fascinated by the past, and the ways in which the past can influence the present, and enjoys exploring these links in her novels.

Thanks to Kathleen McGurl, HQ Digital and Rachel of Rachel's Random Resources for a copy of the book and a place on the tour.