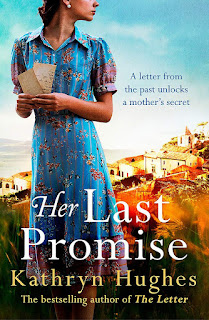 Today I am able to bring you an extract from Kathryn Hughes prize winning novel. Her Last Promise, which was published on August 22nd. It was the Winner Book of the Year in Prima magazine Big Book Awards 2019 . Before the extract, here's a little about the story:

Tara Richards was just a girl when she lost her mother. Years later when Tara receives a letter from a London solicitor its contents shake her to the core. Someone has left her a key to a safe deposit box. In the box lies an object that will change everything Tara thought she knew and lead her on a journey to deepest Spain in search of the answers that have haunted her for forty years.

Violet Skye regrets her decision to travel abroad leaving her young daughter behind. As the sun dips below the mountains, she reminds herself she is doing this for their future. Tonight, 4th June 1978, will be the start of a new life for them. This night will indeed change Violet's destiny, in the most unexpected of ways...

It all began in the November. I can clearly recall the heavy charcoal skies and the mist which hovered two feet above the lawn. The damp smell of rotting leaves mixed with old bonfire smoke. The whole garden seemed to carry the weight of a burden. I’m not even sure why the wea ther’s relevant but lots of stories seem to begin with it. Perhaps I’m trying too hard. Perhaps I should have started with the letter instead. After all, it’s where the story really begins. It was the catalyst for everything that came after.

I dropped the letter onto the kitchen table and flicked on the kettle. I knew I needed the fortification of caffeine before I would have the strength to open it. My appetite had vanished but in another attempt at procrastination, I pushed some bread into the toaster and stared at the letter again. My name and address were type-written and the envelope was a rich cream colour and luxuriously thick. I might have known. The sender had deemed the contents so important that I’d had to sign for it. I propped
it up against the bread bin and pulled down my ‘World’s Best Mum’ mug. I popped a tea bag into the mug and picked up the letter again, fanning myself with it. I was deliberately putting off opening it because I knew that when I did, my life would never be the same again.

I left the unopened letter on the table and took my mug of tea over to the window, prolonging the state of blissful ignorance for as long as possible. I stared out over the garden to the shade of the horse chestnut tree where Dylan’s red and yellow toy car was still parked. A layer of green algae covered the roof, which was no surprise as he hasn’t driven it for years. His turtle-shaped sandpit was still embedded in the lawn, the grass underneath long dead. His whole childhood stretched out before me and I remembered fondly the little tea parties he used to hold for his teddy bears in the Wendy house when he thought I wasn’t looking. He calls it the shed now and denies ever having owned a tea set but it’s safely wrapped in tissue paper and stored in the attic ready for my grandchildren. I thought of him all alone in his room at university, poring over his books, rubbing his eyes with tiredness, his stomach rumbling with hunger as he wondered where his next meal was coming from. On the day Ralph and I dropped him off, I’d carried a box full of pans and cooking implements into the kitchen he was to share with his fellow students. There was no room in the fridge for the fruit and vegetables I had brought as it was already full of the essentials – lager, vodka and a token bag of lettuce. I’d had a feeling all the years of nurturing were going to be undone in one term. There would be nobody who cared if he got his five-a-day, ensured he drank enough water or rationed his Percy Pig habit. And I was right, for in reality he lives on a steady stream of Domino’s, Dairylea Dunkers and whichever lager is on offer in Tesco. He assures me that during the first term ‘nobody’ does any work. No wonder the NHS is in such a state.

I swilled my cup under the tap and wandered upstairs to Dylan’s bedroom. The walls were bare, peppered only with the greasy stains from the BluTack he used on his posters. I slumped down on his bed and smoothed out his Manchester City duvet cover. His life can be measured in duvet covers. His first one was pale blue with little rabbits and ducks on. Then we had Teletubbies, Bob the Builder, a slightly worrying Barbie phase, Thunderbirds and then finally this one. He didn’t take it to university though. He had insisted on a plain ‘grown-up’ one and I’d realised then that his childhood was well and truly over.

He’s studying medicine at Newcastle and I could not be more proud of him. He’s worked so hard for it and considering his father left us when Dylan went into Lower Sixth, it’s nothing short of a miracle. It’s one of the many things I cannot forgive Ralph for, but when your secretary is seven months pregnant with your twins what can you do? I felt the familiar bitterness begin to creep in. Ralph and I tried for years to have another baby but it just wasn’t to be. I think I coped with the disappointment quite well. I threw all my energies into bringing up Dylan and Ralph threw all his into shagging his secretary. There has been a long line of secretaries over the years, culminating in Susie, the mother of his twin girls. I’m sure he loves them but it amuses me no end to see him struggling to cope with the demands of two toddlers and a young wife whose IQ is not much higher than theirs. Naturally, Susie has had to give up work and his current secretary sports a blue rinse and wears tweed skirts. I can’t help thinking Susie must have had a hand in her successor’s selection process. Ralph is fifty-five now, the same age as me. He should be enjoying a more leisurely pace. A couple of golf trips a year with the boys, a nice flash sports car, time to relax in the evenings with a good wine and a box-set. Instead of which, he has to go on holidays dictated by the availability of a kids’ club and drives a huge family bus, the only vehicle capable of transporting all the paraphernalia that accompanies his new family wherever they go. As for relaxing evenings, they are consigned to distant memory. The twins are particularly demanding at bedtime, I believe. He spends the entire evening carting one or both of them up and down the stairs, offering more and more extravagant bribes as the evening wears on. Still, you reap what you sow, I suppose.

I’d known the letter was coming since the day Ralph walked out but I just couldn’t bring myself to open it. It sounds pathetic now but I knew I wouldn’t be able to read the words which would officially herald the end of my marriage. I closed the door on Dylan’s room and headed downstairs, suddenly eager to get it over with. I picked up the letter and ran my finger under the flap. The paper inside was the same rich cream colour as the envelope. I pulled my glasses down from the top of my head and began to read. ‘Dear Mrs Richards . . .’ By the time I’d finished, my legs would hardly hold me up. The letter wasn’t from Ralph’s solicitors at all.


How's that for a taster? Here's what others have to say...


'Storytelling at its finest with characters that come alive and a plot that dances with intrigue. An absolutely first-class read that does not disappoint' Prima 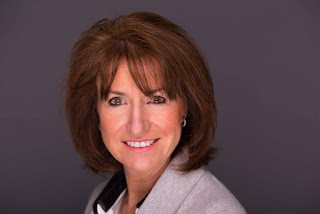 Kathryn Hughes was born in Altrincham, near Manchester. After completing a secretarial course, Kathryn met her husband and they married in Canada. For twenty-nine years they ran a business together, raised two children and travelled when they could to places such as India, Singapore, South Africa and New Zealand. Kathryn and her family now make their home in a village near Manchester. Her first novel, The Letter, was a Kindle Number One bestseller.
You can read my review of The Key here.

Thanks to Kathryn Hughes, and Anne Cater of Random Things Tours for a copy of the book and a place on the tour. 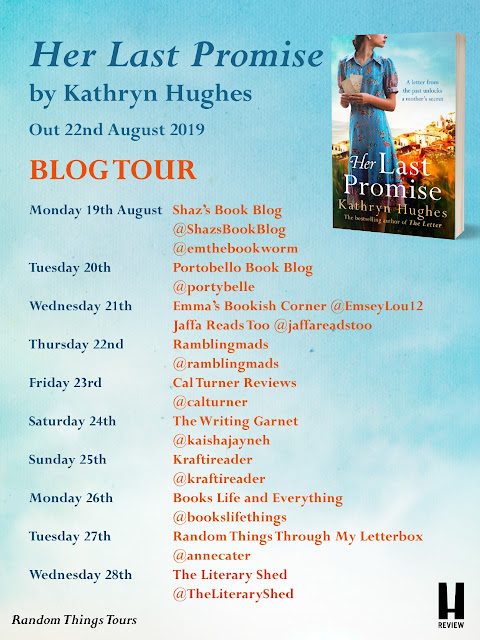