The Man Who Saw Everything by Deborah Levy #Review 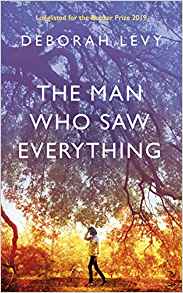 Today I am delighted to be sharing my review of The Man Who Saw Everything. Deborah Levy's novel has been longlisted for the Man Booker Prize 2019 and I leapt at the chance to be on the blog tour to celebrate it. It is published on 29th August by Hamish Hamilton.

In 1988 Saul Adler (a narcissistic, young historian) is hit by a car on the Abbey Road. He is apparently fine; he gets up and goes to see his art student girlfriend, Jennifer Moreau. They have sex then break up, but not before she has photographed Saul crossing the same Abbey Road.

Saul leaves to study in communist East Berlin, two months before the Wall comes down. There he will encounter - significantly - both his assigned translator and his translator's sister, who swears she has seen a jaguar prowling the city. He will fall in love and brood upon his difficult, authoritarian father. And he will befriend a hippy, Rainer, who may or may not be a Stasi agent, but will certainly return to haunt him in middle age.

Slipping slyly between time zones and leaving a spiralling trail, Deborah Levy's electrifying The Man Who Saw Everything examines what we see and what we fail to see, the grave crime of carelessness, the weight of history and our ruinous attempts to shrug it off.

This is a subtle and nuanced novel where time slips from the past to the present and back. You realise that Saul is the mother of all unreliable narrators fairly early on. Points of view felt slippery as I tried to get to grips with just what was happening. In order to try to understand what was happening, I looked back at the novel's title. To me, this is an exploration of observing and being observed. This happens in so many different ways. Jennifer announces that Saul is her muse in her chosen media of photography. In East Germany of 1988, everyone is society seems to be under observation. People are followed and spied on. Privacy does not seem to exist.

After events from 1988 seem to be recurring in 2016, points of view shift. It is hard to comment further for fear of dropping spoilers but you find yourself re-evaluating what happened earlier. At 199 pages, it is a shortish read but absolutely packed with thoughts and observations. There is nothing superfluous, with an economic writing style. It certainly is like nothing else I have read this year, full of originality and a dry wit.

In short: Time slips  but who is looking? 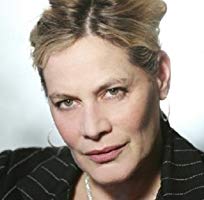 Deborah Susan Levy FRSL is a British playwright, novelist, and poet. Her work has been staged by the Royal Shakespeare Company and she is the author of novels including Beautiful Mutants, Swallowing Geography, Billy and Girl, and the Booker-shortlisted Swimming Home.

Thanks to Deborah Levy, Hamish Hamilton and Viking Books for a copy of the book and a place on the tour.