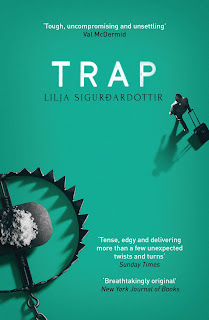 It's great to be back on an Orenda Blog Tour for Icelandic novelist, Lilja Sigurdardottir's second in her Reykjavik Noir Trilogy, entitled Trap. I read the first one, Snare and loved it. You can read my review here.  I also have an extract from Trap for you to read so you can get a sense of Lilja's brilliant style and Quentin Bates' superb translation.

Happily settled in Florida, Sonja believes she’s finally escaped the trap set by unscrupulous drug lords. But when her son Tomas is taken, she’s back to square one … and Iceland. Her lover, Agla, is awaiting sentencing for financial misconduct after the banking crash, and Sonja refuses to see her. And that’s not all … Agla owes money to some extremely powerful men, and they’ll stop at nothing to get it back.

With her former nemesis, customs officer Bragi on her side, Sonja puts her own plan into motion, to bring down the drug barons and her scheming ex-husband, and get Tomas back safely. But things aren’t as straightforward as they seem, and Sonja finds herself caught in the centre of a trap that will put all of their lives at risk…

Set in a Reykjavík still covered in the dust of the Eyjafjallajökull volcanic eruption, and with a dark, fast-paced and chilling plot and intriguing characters, Trap is an outstandingly original and sexy Nordic crime thriller, from one of the most exciting new names in crime fiction.

Tómas jumped from stone to half-buried stone at the edge of the woods, where they formed steps rising up a slope and finishing in the sand at the top of the beach. He was barefoot as he had left his sandals at Duncan’s place. But that didn’t matter; the sand on the beach was soft underfoot, and he could collect his sandals on the way back, before his mother could find out that he had taken them off.

He was only going to pick up a few shells – preferably the black ones, which were the rarest and also the best. Most of the shells on this beach were yellow, brown or a rust red, but there were the occasional black shells and those were the ones he needed for what he was making. It was a suggestion his mother had made. She said it was something she had done as a child, and by the time the cigar box was almost covered, Tómas could see that it was going to be impressive. The box had come from the old guy who lived opposite and Tómas was going to use it to store football pictures.

And then his mother had suggested that he should cover it with shells, so Tómas had spent three evenings gluing them in a pattern to the outside of the box. Now he needed just one more row of black shells to finish the job. There was no doubt in his mind that this was going to be the finest box in the entire world in which to keep football pictures. The tide was high, leaving the beach so narrow that it would be difficult to find any shells now. He would have to come back once the sea had receded. Tómas dug his toes into the sand, his attention now on the entrance to an ants’ nest. There were no ants in Iceland, so this was something new to him, something he found fascinating. The ants’ nest was nothing more than a hole in the ground, but dozens of ants marched to and fro in perfectly ordered single file. They were so intent on what they were doing that it had to be something very special – some kind of ant construction project, perhaps. Tómas picked up a stick and pushed it into the hole, in the hope of reaching all the way down to the nest, but it seemed to be deeper down than he had thought. The ants were alarmed, and for a few moments rushed around in all directions. But they were unbelievably quick to regain their usual discipline, and set about repairing the damage done to the entrance to their nest.

He glanced up from the ants’ nest, looking for whoever had called his name from the other set of steps down to the beach, on the car park side. There were two men waving happily to him. What did they want? He walked hesitatingly towards them, stopping a good way short of where they stood. They looked like they could be Mexicans, and Duncan said those were people you had to be careful of. Tómas didn’t know why – there were no Mexicans in Iceland and nobody had told him just why they were so dubious.

‘What?’ he called to the men, who both smiled amiably. They didn’t look dangerous. One of them sat down on a rock and the other walked away towards a car.


‘You want to buy a puppy?’ the man sitting on the rock asked. So they were salesmen. Florida was full of people selling stuff, and a lot of them were Mexicans.

‘I already have a dog,’ Tómas replied, his curiosity piqued.

‘Where is it, then?’ The man asked, raising one eyebrow.

Tómas shook his head. ‘He’s at home in Iceland,’ he said. ‘But one dog is enough. My mother wouldn’t let me have another one. We’re just here for a long holiday.’

At least, that was what he hoped he was saying. His English was pretty good by now, but he still occasionally used the wrong words, which made Duncan laugh.

But this man didn’t laugh. ‘Well,’ he said and sighed, ‘I don’t know what to do with the puppy back there in the car. I guess I’ll just have to drown him.’

‘What do you think I should do with him?’ The man asked.  ‘Do you know anyone who would take him?’

Tómas’s heart ached. Maybe he could take the puppy and he and his mother could look after it for a few days while they looked for a home for it. Surely she wouldn’t be angry if he came home with a new-born puppy he had saved from drowning?

The man walked away and Tómas followed him over the sand dune and into the car park, even though he was already starting to feel guilty because Teddy the dog had been left behind in Iceland and he hadn’t seen him for such a long time. The other man was sitting in the driver’s seat, smoking. Tómas was furious that he should be smoking near a new-born puppy. Everyone knew that smoke was unhealthy.

But as the first man opened the car’s rear door, he froze as the realisation dawned on him.

‘You called me Tómas,’ he said, looking at the man. ‘How do you know my name?’

As second in the Reykjavik Noir series, Trap follows on where Snare leaves off. I found Lilja's writing style as engaging as before. You feel the cleverness of the story-telling and never question the events as you are swept up in Sonja's life. In Sonja, Lilja has created a clever, quick witted and determined character who has a vulnerable side through her love for her son. She is driven to get him back from his father and there seems to be nothing she will not do to achieve that. It is only at the end that Sonja realises just where her limits are and what she is not prepared to do.

You feel the trap which not only Sonja, but several other characters find themselves in. Once caught up in criminality, it is very hard to escape the web. It seems someone always has a hold over one. This is much more than a straight crime story. You get into Sonja's thoughts and see her motivations. It is an enclosed world within the story but there are plenty of interesting people to meet along the way. It is a cleverly constructed and complex plot which is set in the real world of financial crashes and their aftermath.

In short: whip-smart and tense- a worthy follow-up to Snare.
About the Author 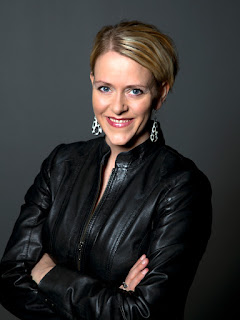 Icelandic crime-writer Lilja Sigurdardóttir was born in the town of Akranes in 1972 and raised in Mexico, Sweden, Spain and Iceland. An award-winning playwright, Lilja has written four crime novels, with Snare, the first in a new series, hitting bestseller lists worldwide. Translation rights have been sold in eight countries to date, and film rights have been bought by Palomar Pictures in California. Lilja has a background in education and has worked in evaluation and quality control for preschools in recent years. She lives in Reykjavík with her partner.

Thanks to Karen Sullivan and Anne Cater of Orenda Books  for a copy of the book and a place on the blog tour.

Don't forget to check out these other great bloggers!