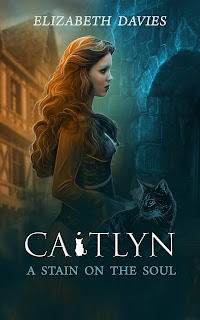 Today I am featuring Book 2 in the Magical Realism trilogy by Elizabeth Davies, Caitlyn - A Stain on the Soul. There is also a great giveaway and the opportunity to win signed copies of the first two books in the trilogy.

Resigned to another lifetime of being a witch’s familiar, Caitlyn has found a degree of peace in her role as the Duke of Normandy’s protector and spy.

But that peace is shattered when she returns to her native land only to come face-to-face with her past, and fall in love with a man who she desperately hopes will become her future.

Set in the 11th century, in the decades leading up to the Norman Conquest in 1066, historical events are interwoven with magical realism, with witchcraft and sorcery coming into play. This is the second book in Elizabeth Davies' trilogy concerning Caitlyn, a witch's familiar, who can change her form between that of a woman and a cat. The victim of a witch's curse, she is trapped in thrall to different witches - in this book, to Arlette, the mother of William of Normandy. At the end of the story, the author gives historical background on the period and the bloodlines which is really informative.

I haven't read the first in the series, but I did not find that a hindrance. I enjoyed seeing the medieval world through Caitlyn's eyes, especially when she was taking on the form of a cat. Tension is built into the story and to me, it is quite unpredictable at times which adds to the suspense. Ending on a major cliff-hanger, the third book in the series is beautifully set up with a really intriguing meeting.

In short: A touch of magic for a Hallowe'en read. 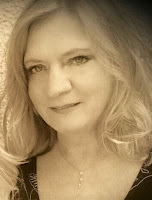 Elizabeth Davies is a paranormal author, whose books have a romantic flavour with more than a hint of suspense. And death. There's usually death...

Thanks to Elizabeth Davies and Rachel of  Rachel's Random Resources for a copy of the book and a place on the tour. 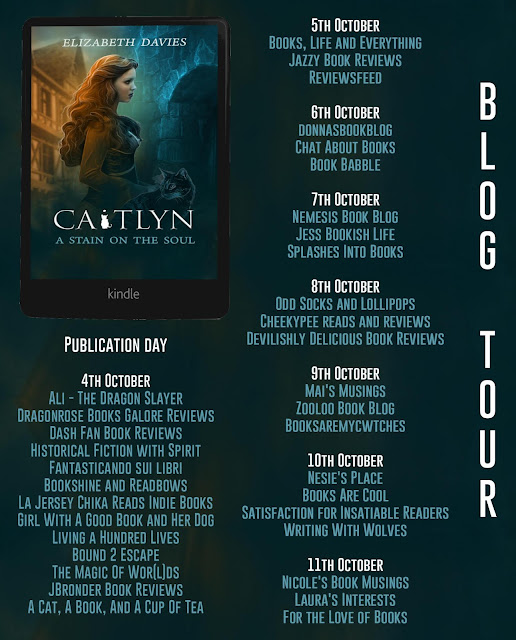 Win signed copies of Three Bloody Pieces and A Stain on the Soul plus a magic mug and a coaster. (Open Internationally)

*Terms and Conditions –Worldwide entries welcome.  Please enter using the Rafflecopter box below.  The winner will be selected at random via Rafflecopter from all valid entries and will be notified by Twitter and/or email. If no response is received within 7 days then I reserve the right to select an alternative winner. Open to all entrants aged 18 or over.  Any personal data given as part of the competition entry is used for this purpose only and will not be shared with third parties, with the exception of the winners’ information. This will passed to the giveaway organiser and used only for fulfilment of the prize, after which time I will delete the data.  I am not responsible for despatch or delivery of the prize