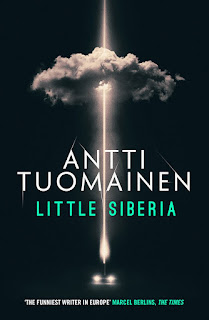 I am thrilled to be taking part in the Orenda Blog Tour to celebrate the UK publication in paperback of Antti Tuomainen's Little Siberia on October 17th. You can read my reviews on some of his earlier books here: The Man Who Die  |  The Mine  |  Palm Beach Finland

Fargo meets Nietzsche in this atmospheric, darkly funny thriller by the critically acclaimed author of The Man Who Died and Palm Beach Finland. A huge Finnish bestseller, Little Siberia topped both literary and crime charts in 2018, and has gone on to sell rights in 24 countries.

A man with dark thoughts on his mind is racing along the remote snowy roads of Hurmevaara in Finland, when there is flash in the sky and something crashes into the car. That something turns about to be a highly valuable meteorite. With euro signs lighting up the eyes of the locals, the unexpected treasure is temporarily placed in a neighbourhood museum, under the watchful eye of a priest named Joel.


But Joel has a lot more on his mind than simply protecting the riches that have apparently rained down from heaven. His wife has just revealed that she is pregnant. Unfortunately, Joel has strong reason to think the baby isn’t his.


As Joel tries to fend off repeated and bungled attempts to steal the meteorite, he must also come to terms with his own situation, and discover who the father of the baby really is.

‘The funniest writer in Europe’ Marcel Berlins, The Times

You realise early on in Little Siberia that Antti Tuomainen's dark sense of humour is going to be running through this piece of Helsinki Noir. His novels have a distinctive voice and you find that under the preposterous events which happen at times, there are some dark themes. Life in Northern Finland is remote and claustrophobic in the isolated small town where there are plenty of secrets yet everyone seems to know each other. Strangers stand out.

The priest, an outsider, who has rather bizarrely been entrusted with guarding a meteorite certainly has his own past which lacks transparency. Just as the meteorite blazes into the landscape, we soon discover that there is a similarly earthshattering shock in store for the priest. As the characters prowl around looking for an opportunity, there are plenty of other issues simmering below the surface. Through the central character of the priest, we get to discover betrayal and whether trust can be repaired, issues of faith and good and bad. Can you be at the centre of the community as priest and yet straddle the lines of criminality? You get to see his human flaws as he works through a crisis in his personal life and reassesses what he holds important. His conclusions may surprise you.

As well as plenty of humour, smart moments and raw emotion, you are also given a rollicking heist plotline. This is certainly out of the ordinary and well worth a read.

In short: Black humour lights up the nordic noir. 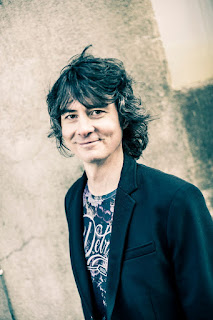 Finnish Antti Tuomainen was an award-winning copywriter when he made his literary debut in 2007 as a suspense author. In 2011, Tuomainen’s third novel, The Healer, was awarded the Clue Award for ‘Best Finnish Crime Novel of 2011’ and was shortlisted for the Glass Key Award. Two years later, in 2013, the Finnish press crowned Tuomainen the ‘King of Helsinki Noir’ when Dark as My Heart was published. With a piercing and evocative style, Tuomainen was one of the first to challenge the Scandinavian crime genre formula, and his poignant, dark and hilarious The Man Who Died (2017) became an international bestseller, shortlisting for the Petrona and Last Laugh Awards. Palm Beach Finland (2018) was an immense success, with The Times calling Tuomainen ‘the funniest writer in Europe’.

Thanks to Antti Tuomainen, Karen Sullivan and Anne Cater of Orenda Books for a copy of the book and a place on the Blog Tour.
Check out these great bloggers! 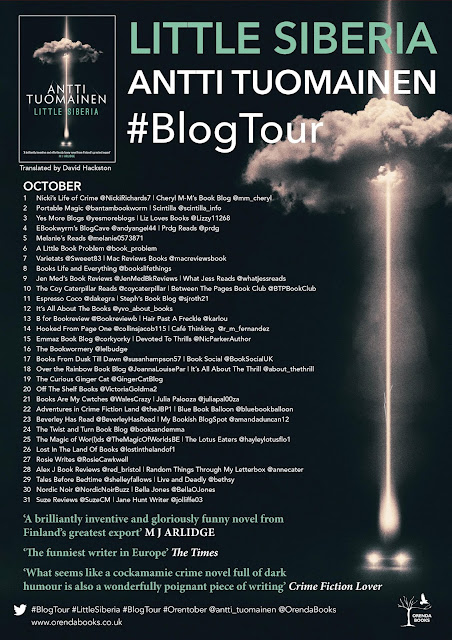