The Summer of Taking Chances by Lynne Shelby #Review 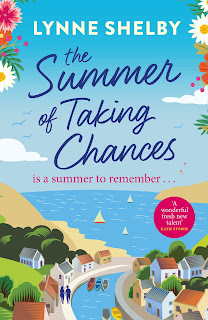 I am delighted to be taking part in the celebrations for the publication of Lynne Shelby's The Summer of Taking Chances, and on the first day of the blog tour as well. It was published on 4th June 2020 by Headline Accent.
Would you take the second chance you’ve always dreamed of?

It’s been ten years since Emma Stevens last laid eyes on Jake Murray. When he left the small seaside village of South Quay to chase the limelight, Emma’s dreams left with him.

Now Emma is content living a quiet and uneventful life in South Quay. It’s far from the life she imagined, but at least her job at the local hotel has helped heal her broken heart.

But when Jake returns home for the summer to escape the spotlight, Emma’s feelings quickly come flooding back. There’s clearly a connection between them, but Jake has damaged her heart once already – will she ever be able to give him a second chance?

This romance has all the ingredients which add to up to heart-warming and satisfying summer read. The setting is inviting with the strolls on the beach and the cosy evenings in the pub. The characters are a lively bunch of would be thespians, all with their own little quirks which makes for a friendly atmosphere. Our two central characters are relatable and likeable- despite Jake's initial feelings about acting. I particularly enjoyed the way you are gradually let into Emma's thoughts as the story progresses and you realise why she feels so hurt by her past.

The background of the ill fated production of Romeo and Juliet adds some interest as Emma and Jake quickly fall back into their own little bubble of quoting parts of the plays at each other. It shows how there is still a connection, despite the passage of 10 years. I always enjoy a Second Chances novel and as you discover, there are several couples in the story who are hoping for one. Friendship and family add to the mix and make this an enjoyable read which frankly, sped by.

In short: Is there enough courage about to take a risk and try again?
About the Author 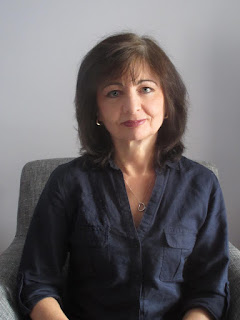 Lynne Shelby writes contemporary women’s fiction/romance. Her debut novel, French Kissing, was published when it won a national writing competition. She has worked at a variety of jobs from stable girl to child actors’ chaperone to legal administrator, but now writes full time. When not writing or reading, Lynne can usually be found at the theatre watching a musical, or exploring a foreign city – Paris, New York, Rome, Copenhagen, Seattle, Athens – writer's notebook, camera and sketchbook in hand. She lives in London with her husband, and has three adult children who live nearby.

Thanks to Lynne Shelby, the publishers and Rachel of Rachel's Random Resources for a copy of the book and a place on the tour.