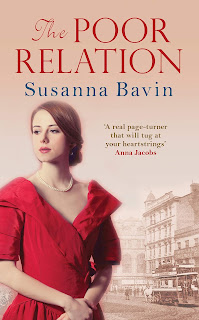 I am delighted to be featuring Susanna Bavin's historical family saga, The Poor Relation which is published by Allison & Busby.
1908, Manchester. Mary Maitland is an attractive and intelligent young woman determined to strike out on her own and earn a living. Finding work at a women’s employment agency, her creative talent is soon noticed and Mary begins writing articles for newspapers and magazines.

But being of independent and progressive mind are troublesome traits when those you hold dear must constantly live up to the expectations of the well-to-do family to which they are linked. With increasing pressures from the powers that be, can Mary find the fine line between honouring her family and honouring herself?

When I realised that this historical family saga was set in Manchester in Edwardian England and was going to cover social and political issues to do with women's suffrage and the place of women in society, I knew that this was going to be right up my street. I wasn't disappointed. The style is fluent and engaging and the central characters are not all sympathetic, but definitely well drawn. The passing on of wealth and inheritance and the paternalistic attitudes which kept some women in their place are starkly shown.

As the twists and turns of Mary's life unfolded, I could not help but get enraged at the attitudes which conspired to keep her back. The other shocking aspect turned out to be the acceptance of the social order by the Maitland family. However, there was also some genuinely brave moments. There is plenty of period detail to bring the story alive. The attempts to get funding for Nathaniel's clinic and the rules and regulations as to who are the 'deserving poor' took me by surprise. This is a story you can get involved in.

In short: Edwardian Manchester which shows you the virtues and faults of a generation..
About the Author 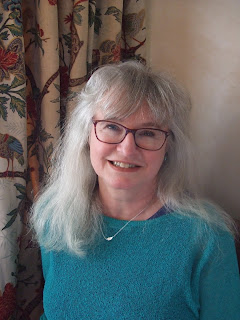 Susanna Bavin lives on the beautiful North Wales coast with her husband and their two rescue cats. She is originally from Chorlton-cum-Hardy in Manchester, where her family has lived for several generations and which provides the setting for her family sagas.

Thanks to Susanna Bavin, Allison and Busby and Rachel of Rachel's Random Resources for a copy of the book and a place on the event.