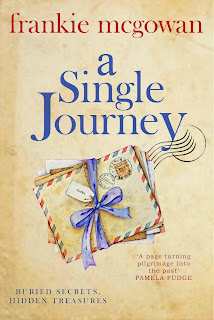 Frankie McGowan's novel, A Single Journey takes you back and forth from Germany of the 1930's to Europe in the  present day. For those who enjoy historical fiction of the 20th Century, it is highly recommended.
Harriet has begun to despair of her life.

With a failed relationship behind her, a business on the rocks, and a flat that’s falling apart around her, she could really use some luck.

Elena Banbury, Harriet’s elderly but imposing landlady and neighbour, frequently entertains the  punters at Harriet’s jewellery stall with tales of the palaces of St. Petersburg and the treasures of Fabergé. But Harriet sometimes feels, guiltily, that she could do without the endless errands that seem to fall to her as Elena’s friend...

Then, unexpectedly, when Elena dies, she leaves all her worldly goods to a grateful Harriet. However, it soon becomes clear that others are shocked by Harriet’s good luck. Shocked—and very, very unhappy.

Challenged in court by Elena’s family from Berlin, Harriet is forced to give up her inheritance and longdreamed-of plans for a new business, and start her life again. But with her reputation in tatters and the memory of Elena tainted, Harriet knows a great injustice has been done.

Against everyone’s advice, Harriet sets off on her own journey to Berlin.

She knows she has to fight for justice. But when she meets the scholarly, perceptive Neil, who generously tries to help Harriet in her mission but who is struggling with a complicated marriage, she must also decide if she’ll fight for love, too.

A Single Journey is a compelling and lively story, combining colourful characters with a page-turning plot and romantic highs and lows.

Fans of Jojo Moyes and Lucinda Riley will be hooked.

The story opens in Germany in the 1930's before switching with a quite different tone to London in the present day. It is clear that the author has carried out much research of the different locations and periods and this pays off as real-life events are woven into the story. Harriet's character stands out as the central one, with plenty of back story and detail to make her interesting. She is feisty, independent and very impetuous but as you discover, has a real burning drive to help other people. Not everyone else we learn about have these traits, though some do. Harriet's friendship with Neil is written with subtlety and for most of the book is a slow burner.

Starting again and reinventing oneself seems to be a theme which runs through the story. Harriet herself has to come to terms with relationships in her past and work out what she really wants to do. As secrets which have been long buried slowly come to light, the tension ratchets up and you realise that there are no superfluous references- they all have a relevance somewhere in the story. There are twists and turns in the story which you do not always see coming, as Harriet meets people from all levels of society. This is a very well written, accomplished novel which engages to the end.

About the Author ( in her own words)

My career began on teenage magazines before joining Fleet Street writing features for among others, The Sunday Times, The Times, The Daily Mail, Sunday Mirror (where I was an assistant editor and columnist).

Later as a magazine editor and while bringing up Tom and Amy, my now grown up children I launched and edited New Woman and  Top Sante before switching to writing the first of my novels. My short stories have been published in a variety of magazines, including You, (Mail on Sunday) Women's Own, Home and Life, Image (Ireland), Redbook (US) The Lady  and Woman's Weekly

More recently I was asked to adapt two of my novels, A Kept Woman and  A Better Life  into screenplays and my latest novel,  A Single Journey is available now. All my novels have reached the top twenty on Amazon which is the best feeling ever for any writer, but this year two of them, A Kept Woman and The Italian Lesson, both went to Number One in Australia for which I was thrilled and grateful to all those lovely people who bought them.

I am currently working on a new novel - well, I say working on it, what I mean is I've got a title for it, A Short Break - and the name of the heroine so all I need now is to try not to lose the plot.

Thanks to Hannah Groves of Endeavour Media for a copy of the book and a place on the tour.

For the duration of the tour, A Single Journey will be available for 99p (August 13th- 25th)  so why not check out the rest of the tour! 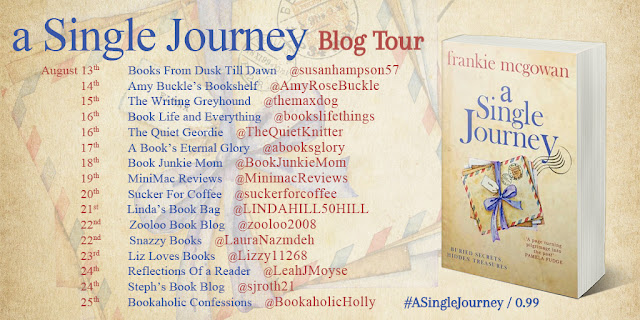