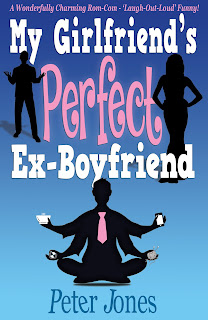 I'm delighted to be on the blog tour for Peter Jones' latest novel, My Girlfriend's Perfect Ex-Boyfriend. I have an extract from the book for you to read but first, here is a little about the book:

Adrian Turner, Mountaineer, Secret Agent, Fireman… Ade would dearly like to be any of these things, though he’d trade them all to win the heart of feisty Public Relations Executive, Paige.
Instead, he’s a disillusioned school teacher, on suspension, after an unfortunate incident with a heavy piece of computer equipment. And somebody’s foot. And Paige? Despite being his girlfriend for the past eighteen months, she still seems to have one foot out of the door and hasn’t quite committed to leaving a toothbrush in the bathroom.
​
Of course, it doesn’t help that she’s working with her ex-boyfriend, Sebastian. A man who in almost every way imaginable is better, taller, wealthier, hairier, and infinitely more successful than Ade.
​
Is Paige still in love with Sebastian? Why then did she suggest they get away for a few days? Some place romantic…
​
But when Adrian finds himself in Slovenia - with Sebastian in the room down the hall - he realises there’s serious possibility that he’s in danger of losing his job, his mind, and the woman he loves…

So, in this scene, Adrian Turner (burnt out, disillusioned computer science teacher… and our hero) and his girlfriend Paige, are jetting off on holiday (with their friends) to try and take Ade’s mind off a pending disciplinary hearing, and to get away from Paige’s ex-boyfriend Sebastian.

“Forget about it,” says Paige, after she’s finally figured out where she’s going to put her handbag for take-off, without burying it in the overhead lockers, or further incurring the wrath of the flight attendants.

“Think about something else.”

“No,” she says, “you weren’t.” I huff impatiently, loosen my seatbelt slightly, look around – again – for somewhere to put my bottle of water that isn’t my lap, wonder – again – why the airline felt it necessary to remove those elasticated string pockets from the backs of the seats, and finally return to staring at the comforting illustrations of what to do should the plane burst into flames, plummet out of the sky, and land in the middle of shark infested waters. I turn to Paige.

She gives me a world weary I’ve-heard-this-all-before-and-now-I’m-going-to-have-to-kill-you look – and I stop talking.

“What’s the bloody hold up anyway?” I ask.

“Oddly enough, they’ve neglected to tell me,” says Paige, riffling through the pages of some glossy magazine she felt the need to buy when we were shopping for water, toothpaste, under arm deodorant, and all the other things you risk having confiscated by airport security should you have the foresight to bring your own. The voice of the pilot interrupts an advertisement for scratch cards, which is fortunate because we’ve heard it at least twenty times all ready.

“Well, hello again ladies and gentlemen. Apologies for the slight delay this morning – we’re just waiting for two more passengers who needed a little extra time, but we should be right on our way, any moment.”

“When I said think about something else,” says Paige, “this isn’t what I meant.”

“I should have stayed at home,” I say. “Met with Kev. Sorted this whole thing out.”

“What ‘heat’!!?” I ask. “Haven’t Sebastian’s ‘legal representatives’ got better things to do? How comes they’re not up to their ears defending their client from all the disgruntled users of his bloody white boards?” But Paige doesn’t answer, something at the front of the aircraft seems to have her attention. “Paige?”

“Oh my god…” she says under her breath, suddenly shrinking down in her seat and using her hand to shield her eyes from an imaginary bright light.

“Are you even listening to me?” I ask. She peeks at me from under her palm, her face several shades paler than before.

“You want to know what I think?” she whispers.

“I think you can ask him yourself.” It takes me a moment to figure out what she means, then I lift myself out of my seat, just slightly, and look down the aisle towards the front of the aircraft. There, shaking hands with flight attendants and beaming his trade mark smile… is Sebastian. I fall back into my chair.

“But you must have…”

“I didn’t! I didn’t know!” I lift myself out of my seat again, just in time to see a flight attendant hand him a pair of crutches, and then he slowly makes his way down the aisle towards Genie, Genie’s family, Genie’s friends, and us, greeting people as he goes, and apologising occasionally for making everybody wait.

“Eugenia! Hi!” he says, with a wave and a smile. “And Damien! Looking good, my man,” shooting at him with his forefingers. When he eventually makes eye contact with Paige and I he treats us to a jazz-hands double wave – as best he can with his crutches – before continuing his journey to one of the few remaining middle seats, just across the aisle from Paige, one row in front.

As he gets there he turns slightly, hands the crutches to the flight attendant who followed him down, and then, standing on one leg, bends down to address the man sitting in the aisle seat.

“Hey, guy,” he says, taking the man’s hand and shaking it firmly.

“Hi. My name is Sebastian – look, I know this is a bit ‘out there’, but would you be really put out if I asked you to relocate? Maybe to the extraordinarily comfortable looking seat behind you? It’s just that my lady-friend and I would really, really like to sit together and there aren’t two seats together. But then I saw you and thought, ‘now that looks like the kinda guy who wouldn’t mind helping another guy out’. Would you do that for us?” The man stares back in astonishment. And for a second or two the entire aircraft seems to be holding its breath whilst they wait to see what’ll happen next. Even Paige, who theoretically knows Sebastian better than anyone else on the planet, seems gobsmacked.

“Er, not at all,” says the man, reluctantly surrendering to his innate Britishness, “be my guest.”

“Thank you so much,” says Sebastian as he eases himself into the now vacant chair. He flashes us one last smile and then shuffles across to the middle seat. Which is when a woman in dark glasses and a particularly… well… flattering, short, low-cut, figure hugging, dress, squeezes past the flight attendant, and takes the seat next to Sebastian. They exchange hushed words, and a ripple of laughter, then she tosses a head full of flowing chestnut locks, turns and looks over her shoulder – at us. She gives us both a warm, friendly smile… and then, very deliberately aimed at me, a playful wink.

Out of the corner of my eye I see my girlfriend’s mouth drop open, before her head spins round to face mine.

“How the hell would I know?”

“But she winked at you!”

“But she winked at you!” And with that Paige’s head just kind of snaps forward, and I can feel her beginning to fume next to me.

I’d be lying if I said I didn’t feel just a little bit pleased about that.

Peter Jones has written this story completely from a man's point of view which is a refreshing change for this genre of literature, the Romantic Comedy. There is plenty of humour in his way of looking at the world and the situations he finds himself in. I found quite a few of the secondary characters amusing as well, particularly Gary,the schoolboy who befriends Adrian. In fact there was a ring of truth about most of the scenes which took place in school.

Sebastian, Adrian's nemesis, is larger than life. You can probably tell that from the above extract. He adds quite a lot of colour to the book, he is so domineering- at least from Adrian's perspective. The only character I struggled to figure out was in fact, Adrian's girlfriend, Paige. Maybe that was because Adrian struggled in that department as well.

Beautifully readable with a well paced plot, this is an enjoyable read.

In short: Rom Com with a twist
About the Author 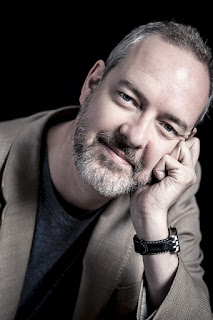 Peter Jones started professional life as a particularly rubbish graphic designer, followed by a stint as a mediocre petrol pump attendant. After that he got embroiled in the murky world of credit card banking. Fun times.
​
Nowadays, Peter spends his days writing, or talking about writing. He’s written three novels; a Rom-Com (Romantic Comedy), A Crim-Com (Crime Comedy), and a Rom-Com-Ding-Dong (a sort-of Romantic-ish Comedy, with attitude). He’s currently working on his fourth novel, which - if it’s a musical - he’ll no doubt describe as a Rom-Com-Sing-Song. (Spoiler: It isn’t).
​
He is also the author of three and a half popular self-help books on the subjects of happiness, staying slim and dating. If you’re overweight, lonely, or unhappy – he’s your guy.
​
Peter doesn’t own a large departmental store and probably isn’t the same guy you’ve seen on the TV show Dragons’ Den. 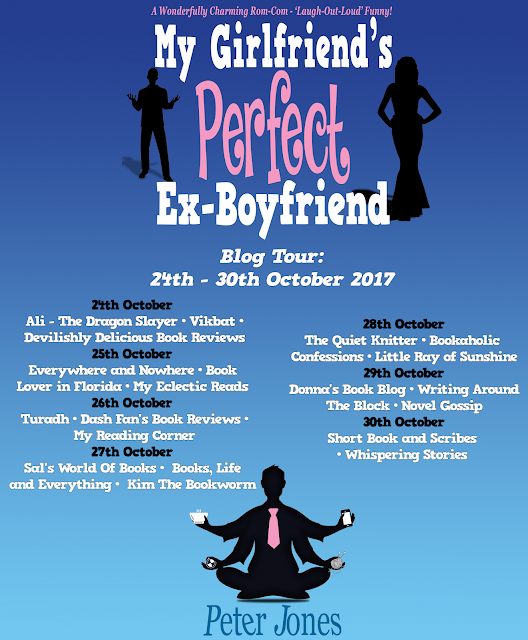