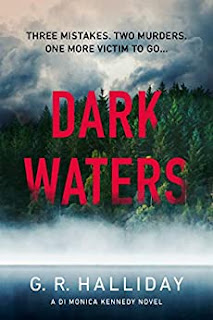 Today we take a look at the haunting new novel, Dark Waters, from G. R. Halliday, author of FROM THE SHADOWS, shortlisted for THE MCILVANNEY DEBUT PRIZE

Annabelle has come to the Scottish Highlands to escape. But as she speeds along a deserted mountain road, she is suddenly forced to swerve. The next thing she remembers is waking up in a dark, damp room. A voice from the corner of the room says ‘The Doctor will be here soon’.

Scott is camping alone in the Scottish woodlands when he hears a scream. He starts to run in fear of his life. Scott is never seen again.

Meanwhile DI Monica Kennedy has been called to her first Serious Crimes case in six months – a dismembered body has been discovered, abandoned in a dam. Days later, when another victim surfaces, Monica knows she is on the hunt for a ruthless killer.

But as she begins to close in on the murderer, her own dark past isn’t far behind …

'DARK WATERS is dark and disturbing from page one - in the best possible way. The plot is intricate and layered, and peppered with revelations that will keep you reading into the night' Yrsa Sigurðardóttir

This is a dark and disturbing tale. You are aware from the beginning that you are going to have an uncomfortable journey. You follow the police investigation, led by DI Monica Kennedy, as the gruesome discoveries are made but also glimpse some of the other victims. You share the horror which Annabelle feels first hand. The story is claustrophobic and complicated and at one point, I did wonder if the truth was actually going to emerge.

The other interesting aspect of the story lies around the lives of the police, particularly Monica. You learn about her homelife and family and see that for her, her job has some challenges. It seems she has some demons of her own to come to terms with. I read this as a standalone, but in fact it is the second novel featuring Monica. However, I found it totally satisfying. Tautly written with a masterful plot, the story is not for the fainthearted.

In short: Dark deeds- one to read with the lights on!

G.R. Halliday was born in Edinburgh and grew up near Stirling in Scotland. He spent his childhood obsessing over the unexplained mysteries his father investigated, which has proved excellent inspiration for From the Shadows. The book was shortlisted for the McIlvanney Debut Prize 2019. G.R. Halliday now lives in the rural Highlands outside of Inverness, where he is able to pursue his favourite pastimes of mountain climbing and swimming in the sea, before returning home to his band of semi-feral cats. Dark Waters is his second novel.

Thanks to GrHalliday and Mia Quibell-Smith of Vintage for a copy of the book and a place on the tour. 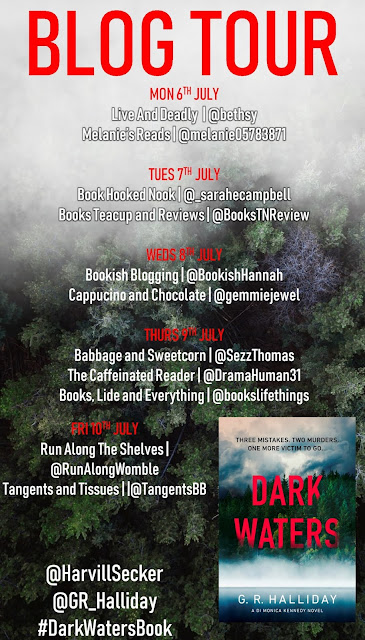