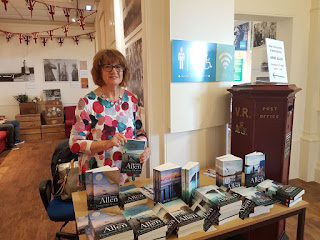 I am delighted to be joined today by Anne Allen, the author of The Guernsey Novels. Anne is going to share with us her ten favourite places to visit in beautiful Guernsey. There is also a very special Prize Draw for you to enter with the chance to win a two night break to Guernsey! Details on how to enter at the foot of this post.

Welcome to Books, Life and Everything, Anne and over to you!


1. St Peter Port, the island capital and only town, known locally simply as ‘Town’. It has everything you could wish for in a relatively small area: a busy harbour for commercial shipping and marinas for local and visiting yachties; a bustling shopping district leading from the harbour, consisting of both national chains and small, local independents offering a unique shopping experience; a comprehensive choice of cafés, bars and restaurants all within walking distance; and parks and museums for when I needed a peaceful retreat or a dose of local culture.

2. Castle Cornet, an old fortress standing on the breakwater at the entrance to the main harbour, dating back to the thirteenth century with walls seeping history everywhere you turn. It used to be a separate island but was joined to St Peter Port in the 1860s and then the concrete breakwater seen today after WWII. Each time I go I find some new nook or cranny to explore –and it’s brilliant fun for children.

3. Vazon Bay on the West Coast  There are numerous super sandy beaches around the coast of Guernsey, but, for me, Vazon is the best. The golden beach curves around the bay and at low tide the sand stretches out to an increasingly distant sea. It’s popular with surfers and kite-surfers, the kites forming a colourful splash against the sky. When I lived in Guernsey there was a basic shop offering snacks and beach goods but now there’s a super new café. Over the road is one of my favourite fun restaurants, Crabby Jacks, offering family-friendly meals of a high standard throughout the day. I’ve enjoyed many Sunday lunches there with my family.

4. Herm A tiny island, a mile by a mile and a half long, just a few minutes’ ferry ride from the harbour but a world away in atmosphere and appearance. For me, it’s a magical place, full of mystery and hidden charm. A place to heal body and soul when needed or when I wanted to re-charge and relax on the wonderful Shell beach. It’s a well-known fact that hundreds of passengers can spill out from the morning ferries, but within a short while you could be walking around without sight of anyone else. An island Tardis! I love the bustling Mermaid Tavern for a drink and an ice cream and the Ship Inn for a tasty lunch, before or after browsing the fascinating little shops which offer a unique range of goodies to tempt me.

5.  Pleinmont An area at the south-western tip of the island and off the beaten track. I lived on the west coast at Perelle and a few minutes’ drive took me to the car park at Portelet Harbour, a lovely little beach adjacent to a wooded area only accessible on foot. I used to walk there amongst the trees and head for the area known as the Fairy Ring- Table des Pions - , a saucer-shaped grassy ring surrounded by stones and long associated with fairies, though without real proof. Guernsey folk are extremely superstitious and who am I to disagree?

6. Bordeaux Harbour Before moving to Perelle I lived for a few years in Bordeaux, around the corner from the little harbour looking out to Herm and the other islands. I loved it! I could set out to walk northwards around the coast or sit on the beach and watch little boats coming or going.

7. L’Ancresse An area in the north encompassing a super sandy bay which curves round to join Pembroke Bay and edged by L’Ancresse common.  Great for walks along the beach at any time of year as well as stretching your legs on the common. I would often go with friends and finish up by having a coffee or hot chocolate in the kiosk. On a windy day, I’d return home invigorated.

8. Bluebell Woods Are to be found just south of St Peter Port and off the coastal path to Fermain Bay. I’ve always had a ‘thing’ about bluebell woods since I was a child, and the ones in Guernsey are beautiful. What better sight can there be than a carpet of these tiny blue flowers nodding their heads in a gentle spring breeze? Trees form a protective arch above as you stroll on the paths, avoiding crushing these beautiful flowers. Magical!

9. Reservoir This might seem an odd choice on an island surrounded by sea, but the reservoir in Saviours is a wonderful place to go. There’s a recognised Nature Trail through the trees surrounding the reservoir and being freshwater, attracts various birds and other wildlife not seen elsewhere.

10. The Bridge An area on the north-east coast set around St Sampson Harbour and offering a mini-version of St Peter Port, with its own marina and shops to explore. It was my go-to place when I lived in Bordeaux and parking’s a lot easier than in Town!

Those sound idyllic, Anne. Thanks for sharing them with us. 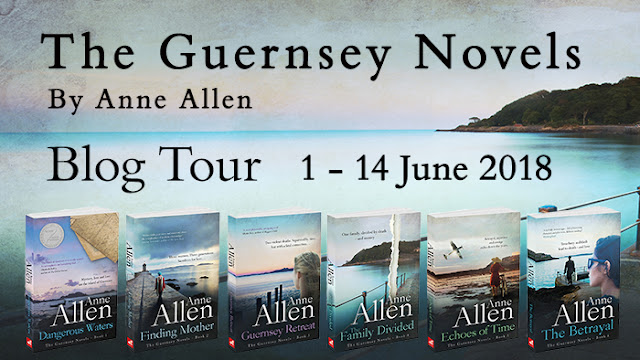 Now let's find out some more about The Guernsey Novels!


All the stories take place predominantly on the island of Guernsey and are linked by characters popping up from one book to another. They provide an ongoing story of a ‘village’ spread, so far, over 6 years. Each book is standalone with fresh new lead characters with their own links to the German Occupation during World War 2, having an impact on the present.

The Guernsey Novels are a mix of mystery, family drama, and love story and influenced by the author’s love of the island where she spent many happy years. Guernsey itself is always a main character in the books, offering a gorgeous backdrop to all the sorrows, joys and tragedies she describes. 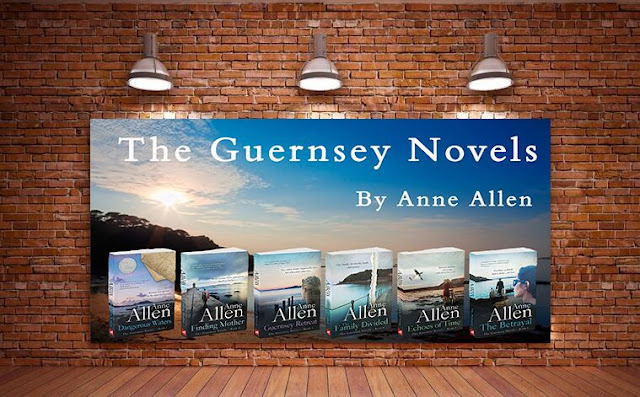 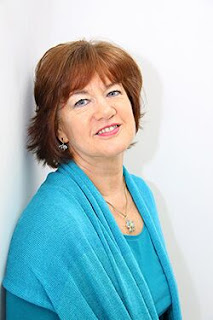 Anne was born in Rugby to a Welsh father and an English mother. As a result, she spent many summers with her Welsh grandparents in Anglesey and learned to love the sea. Now she is based in Devon to be near her daughter and two small grandchildren. Her restless spirit has meant many moves, the longest stay being in Guernsey for nearly fourteen years after falling in love with the island and the people. She contrived to leave one son behind to ensure a valid reason for frequent returns. Her younger son is based in London – ideal for city breaks


By profession, Anne was a psychotherapist who long had a desire to write and Dangerous Waters, her first novel, was published in 2012. It was awarded Silver (Adult Fiction) in TheWishingShelfAwards 2012.

Since then she has published five more books in The Guernsey Novels series; Finding Mother, Guernsey Retreat, The Family Divided, and Echoes of Time; winner of The Diamond Book Award 2017, a finalist in Readersfavorite awards and granted a ChillWithABookAward. Book 6, The Betrayal, was published in October 2017.

Thanks to Anne Allen, and Anna-Lisa Hasedzic of The Globeflower Agency for a place on the tour.

courtesy of The Guernsey Novels by Anne Allen

Would you like to visit gorgeous Guernsey? Well, here is your chance to win a two-night trip to this beautiful island, courtesy of Anne Allen, author of the riveting book series, The Guernsey Novels.

Anne Allen’s fascinating book series, The Guernsey Novels, comprises six standalone novels. All the stories in her novel series, take place predominantly on the island of Guernsey and are linked by characters popping up from one book to another. They provide an ongoing story of a ‘village’ spread, so far, over 6 years. Each book is standalone with fresh new lead characters with their own links to the German Occupation during World War 2, having an impact on the present. The Guernsey Novels are a mix of mystery, family drama, and love story and influenced by the author’s love of the island where she spent many happy years. Guernsey itself is always a main character in the books, offering a gorgeous backdrop to all the sorrows, joys and tragedies she describes.


About the Author Anne Allen

Anne Allen, author of The Guernsey Novels[/caption] Anne Allen lives in Devon, by her beloved sea. She has three children and her daughter and two grandchildren live nearby. She was born in Rugby, to an English mother and Welsh father. As a result she spent many summers with her Welsh grandparents in Anglesey and learnt to love the sea. Her restless spirit has meant a number of moves which included Spain for a couple of years. The longest stay was in Guernsey for nearly fourteen years after falling in love with the island and the people. She contrived to leave one son behind to ensure a valid reason for frequent returns. By profession Anne was a psychotherapist but has long had creative ‘itches’, learning to mosaic, paint furniture, interior design and sculpt. At the back of her mind the itch to write was always present but seemed too time-consuming for a single mum with a need to earn a living. Now retired from the 'day job', there’s more time to write and Anne has now published six books in The Guernsey Novels series. She will be publishing her seventh novel later in the year. To find out more about Anne visit her website: you can also find her on Twitter and Facebook.