I am delighted to be part of the Blog Tour to celebrate the publication of Jenny Blackhurst's latest novel, Before I Let You In on November 3rd 2016. Jenny has kindly agreed to let us see a deleted chapter from her novel. Before we see it, this is what the publisher has to say about the book:

If you don't know who is walking through the door, how do you know if you should let them in? 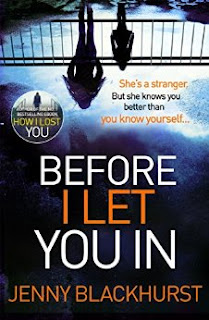 Karen is meant to be the one who fixes problems.


It's her job, as a psychiatrist - and it's always been her role as a friend.


But Jessica is different. She should be the patient, the one that Karen helps.


But she knows things about Karen. Her friends, her personal life. Things no patient should know.

And Karen is starting to wonder if she should have let her in . . .

Without further ado, here is that deleted chapter:


It had been a bad idea born of desperation. 'Date night'. Eleanor had suggested it and Adam had played along, although it had been clear he'd been terrified at the idea of having to sit across a table from his wife and make small talk that didn't include who-said-what-to-whom and who-started-it. They’d arrived home so early that even her mother looked surprised to see them, walking through the door sober and serious rather than falling through like giggling teenagers like they had in the old days.

Adam had offered almost instantly to take her mum home and Eleanor had allowed herself to think for a second he might be trying to get rid of her so they could snuggle up on the sofa, maybe stick on a film or one of the few programmes they both enjoyed. The reality of the situation had hit, however, when he’d announced as he was heading out of the door that he might as well pop into Dave’s on the way home; he’d promised to look at his computer and if he was going to be out anyway…

Eleanor refused to cry. She’d just changed into her comfiest onesie and pulled her laptop onto her knees. She’d read about a website called Mumsnet, where a bunch of women apparently went to have a moan about all things Motherhood and she felt in the mood to give it a go.

The screen loaded and instantly Eleanor knew she was looking at her saviour. A large slideshow of articles flashed in front of her, ‘What to do when your relationship starts to suffer: when the going gets tough don’t get going’, ‘How to cope with those sleepless nights: making your life and baby’s easier to bear’, and ‘Support when you feel like it’s all too much: we’ll be there for you.’

She felt less alone just by reading the titles. If someone had taken the time to write these articles then she couldn’t be the only mum who felt this way. Clicking on the ‘support’ headline took her straight to the forums where the most active chat topics were listed across the top.

The world around her narrowed to the 10 inches of the laptop screen in front of her. For the next hour she clicked through discussions ranging from women who wanted advice on the colour of their baby’s pooh to what they should read on their holiday, or how to distinguish Braxton Hicks from labour pain. These women were talking about everything, things they could be talking to their friends about. Clearly they preferred the advice of strangers where no one was judging them - or if they were it didn’t matter because no one knew their real names.

She wasn’t sure exactly what she was there to do. Taking part in the conversations almost felt like admitting defeat, admitting she needed help from people she didn’t even know if she’d think about speaking to on the street or at the park. Browsing seemed harmless enough, she was just a voyeur in these women’s misery. But they didn’t seem miserable, not really, not even when the topics were more serious, like ‘I feel like I made a terrible mistake, I’m not sure being a mum was the right choice for me.’ Before long the other mums were wading in with their own stories of horror, hilarious anecdotes and messages of support. Surely it couldn’t hurt just to set up a username? That wasn’t admitting to anything, it didn’t make her like these women. But already she was thinking that perhaps she was like them. Perhaps this was what motherhood turned you into, whatever, whoever, you were before, you were now doomed to a life of insecurity and fear.

It was so easy to set up an account that Eleanor barely realised she was doing it until it came to choosing a username. Without stopping to think about what it meant she typed the words Tired&Tearful78 and choosing not to add a photo she clicked Submit. And then she was back to eavesdropping on the conversations of others.
This place had everything. It was easy for the minutes to melt into hours and Eleanor found herself typing a reply to DH says I need to do more around the house AIBU????

Dear Mumsnetters – you are not going to f-ing believe what DH said to me this morning!! He told me that he was fed up of the house looking like a bomb hit it and could I consider actually doing some housework at some point on my maternity leave??
I didn’t know what to do – I just waited until he left for work and cried. I already look after our 2 kids as well as the newborn and am so exhausted from lack of sleep. Am I being unreasonable? Should the house be spotless?

She held her breath and hit F5 every few minutes until another reply popped up under hers.

Jaydensmummy1986
Totally agree with T&T! I’d have followed up with a scalding hot cup of tea and my fist tbf.

ooohtheHokeyCokey
What a cock! What’s wrong with his arms?????

Eleanor was amazed at how thick and fast the replies came in until even the original poster was commenting with smiley faces and LOL’s. And someone had agreed with her! She didn’t know what she had been expecting – she’d heard some stories about how bitchy and unsupportive online mums could be but these women were all coming together to reassure 123andimdone that she wasn’t alone and there wasn’t a mean comment in sight. Maybe this was the place to talk to people after all. It wasn’t like anyone knew who she really was, she could walk past Babyshambles39 or Wyne4brekkie in the street and she wouldn’t have the first clue who they were.

The video monitor crackled into life and Eleanor froze, her fingers hovering over the keyboard. Oh God please don’t let him wake up yet, she pleaded silently, almost afraid to press the screen button in case he somehow sensed she was watching and started to scream. The monitor gave a tiny little croak and fell silent. Eleanor let out the breath she’d been holding and felt a stab of annoyance replace the relief. Why couldn’t she even get a couple of hours to herself? How come Adam was out until stupid o clock while she held her breath at every croak from upstairs?
Turning back to the screen she clicked the ‘start a new thread’ link and began to type in the box that popped up.
Dear anybody,
DS is four months old and things don’t seem to be getting any easier. DH works away all hours and is never around to help, DS1 resents the amount of time I spend with the baby and I’m so exhausted all the time that I‘m forgetting everything and constantly missing appointments/late for dates/forgetting to do things etc. I used to be so organised and now I feel like I’m falling apart bit by bit and I don’t know what to do. Anybody else feel this way?
The flash of a ‘new comment’ pulled her thoughts from wandering towards darker places. Eleanor braced herself to be told to stop whinging and get over herself as she scrolled down to underneath her post.

BlueMummy
Sorry cant help but know how you feel – it’s so hard sometimes especially when ur partner isn’t supportive. All I want is 10 minutes where I can have a bath without listening out for screaming

C0okiesncr3am
With u there  Ysterday I started shouting ‘I just want a piss on my own’ over & over until OH took DS out 2 the park. Swear he thought I was having a breakdown. Maybe I was :-o Big hugz xx

For the first time in months she was somewhere where she felt accepted, understood. She loved her friends but they didn’t understand - how could they? And she’d been too busy with work, and too arrogant to attend antenatal classes, she was a second time mum; she didn’t need that kind of help. What she’d forgotten - intentionally or not - was that she hadn’t done any of the new mum stuff with Toby. He’d come to her fully formed and she’d never needed any support the way she did now. For her this was like the first time. These women would understand, and best of all they wouldn’t judge. She was safe here.


I thoroughly enjoyed reading this novel which turned out to be a real page turner. The relationship between the three friends, Karen, Bea and Eleanor kept me guessing as the dynamic between them shifted as the events unfolded. Karen, Bea and Eleanor all had their own story to explain why they behaved as they did. The deleted chapter which never made the book centres on Eleanor who is struggling to cope after the birth of her child. It gives an insight into her desperation and feelings of inadequacy and at the same time, captures beautifully, and with humour, the range of reaction waiting for someone on Mumsnet. The story unfolds from different perspectives although it chiefly centres on Karen, the psychiatrist who has a compulsion to help everyone.  The range of characters was confined to a tightly drawn circle which added to the ever worsening tension. A thrilling ending made the whole story worthwhile.


In short: a tense psychological thriller which keeps you guessing to the end. 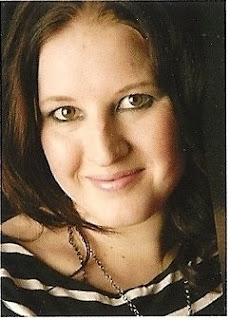 Jenny Blackhurst grew up in Shropshire where she still lives with her husband and children. Growing up she spent hours reading and talking about crime novels - writing her own seemed like natural progression.

Connect with Jenny on Twitter
Thanks to the publishers, Headline, for  a place on the Blog Tour and a copy of the book. Before I Let You In will be published on 3rd November 2016. 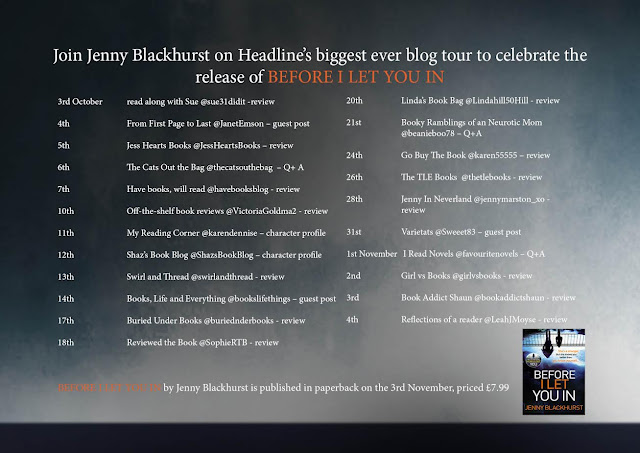